Justice Robert was a big disappointment on ObamaCare and Justice Scalia’s comments on the Second Amendment are unbelievable.

U.S. Supreme Court Justice Antonin Scalia outraged conservatives with his remarks on gun control and the Second Amendment this morning in a Fox News interview with Chris Wallace.

Scalia stated that the court may issue gun control rulings in the future due to “precedent” indicating that within the context of the 18th century the Framers of the Constitution allowed for local restrictions on guns and bans on certain types of weapons.

In the comment section of the story as reported by The Blaze, conservative reaction to Scalia’s remarks ranged from stunned to outraged.

I think the lifetime tenure of U.S. Supreme Court Justices should really be examined by the Congress and the states. I realize there would need to be a Constitutional Amendment, but it is sorely needed.

Justices serving for life become isolated and are not held accountable to the voters from which their power is derived.

About damn time. Let’s get this issue decided before it destroys more of the American economy.


The Obama administration chose not to ask the 11th Circuit Court of Appeals to re-hear a pivotal health reform case Monday, signaling that it’s going to ask the Supreme Court to decide whether President Barack Obama’s health reform law is constitutional.

The move puts the Supreme Court in the difficult position of having to decide whether to take the highly politically charged case in the middle of the presidential election.

The Justice Department is expected to ask the court to overturn an August decision by a panel of three judges in the 11th Circuit Court of Appeals that found the law’s requirement to buy insurance is unconstitutional. The suit was brought by 26 states, the National Federation of Independent Business, and several individuals.

The petition isn’t due until November, and the administration could get an extension.

Opponents of the law had expected the government to ask for the so-called en banc hearing to delay a ruling by the Supreme Court.

“The president and solicitor general deserve full credit for refusing to employ delaying tactics in this pressing constitutional controversy,” said Randy E. Barnett, a Georgetown Law professor who is working with the plaintiffs.

But former acting Solicitor General Walter Dellinger, who has worked on briefs in support of the legislation, said the move should be read as a sign of confidence from the administration.

“This confirms what I had already concluded: That the government is confident that it’s going to prevail in the Supreme Court and would like to have a decision sooner rather than later,” Dellinger told POLITICO.

The issue of the constitutionality of the individual mandate has been widely expected to be decided by the Supreme Court. The key question has been the timing.

So, it looks like the Supremes will take up the case during this year’s term and render a decision during the Presidential election. If SCOTUS accepts the case by January, it could be heard in the Spring with a decision sometime in June.

ObamaCare WILL be an issue during the Presidential campaign season and if SCOTUS were to rule the law constitutional, it could galvanize the RIGHT to defeat President Obama in November.

I suggest my friend and reporter Timm Herdt watch MSNBC on Friday night or Saturday afternoon.

He should pay attention to the show Lockup. Obviously, Justices Scalia and Thomas have. 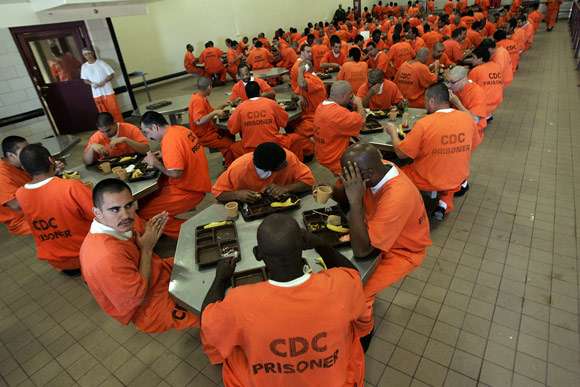 You remember the story from this morning?

Now, the California Republican Party is weighing into the issue.

“The reason for this unfortunate Supreme Court decision lies with those in charge of the California legislature for the last two decades.  While the Democrat leadership has wasted $23,000 per Assembly and Senate bill on thousands of unnecessary bills each year, not to mention wasteful programs, they have failed in their most basic obligation to keep Californians safe by building adequate prisons. Now that neglect is taking the form of the forced release of 46,000 prisoners. It is a dereliction beyond shameful.”

Well, yeah. The Democrats have had a hammer lock on the California Legislature for decades and now hold all of the statewide Constitutional offices.

So, what say you Jerry Brown?

Not a direct order, but this will be the result of their decision released this morning.


A closely divided Supreme Court on Monday cited “serious constitutional violations” in California’s overcrowded prisons and ordered the state to abide by aggressive plans to fix the problem.

In a decision closely watched by other states, the court by a 5-4 margin concluded the prison overcrowding violated constitutional protections against cruel and unusual punishment. Pointedly, the court rejected California’s bid for more time and leeway.

“The violations have persisted for years,” Justice Anthony Kennedy wrote for the majority. “They remain uncorrected.”

“For years, the medical and mental health care provided by California’s prisons has fallen short of minimum constitutional requirements and has failed to meet prisoners’ basic health needs,” Kennedy wrote.

Driving the point home, the court’s majority made the highly unusual if not unprecedented move of including stark black-and-white photographs of a jam-packed room at Mule Creek State Prison and cages at Salinas Valley State Prison. Conservative dissenters, in turn, warned dire consequences will result.

But, California is broke and on the verge of insolvency. Where does SCOTUS seem to think the money to relieve overcrowding will come?

The simple solution will be letting tens of thousands of convicted felons out of prison and onto the streets. What could go wrong?


“Today the court affirms what is perhaps the most radical injunction issued by a court in our nation’s history, an order requiring California to release the staggering number of 46,000 convicted felons,” Justice Antonin Scalia declared.

Eighteen states — including Texas, Alaska and South Carolina — explicitly supported California’s bid for more leeway in reducing prison overcrowding. These states worry that they, too, might face court orders to release inmates.

California’s 33 state prisons held about 147,000 inmates, at the time of the Supreme Court’s oral arguments last November. This is down from a high of some 160,000 previously cited in legal filings. The higher figure amounted to “190 percent of design capacity,” officials said.

Last year, a three-judge panel ordered California to reduce its inmate population to 137.5 percent of design capacity within two years. That’s the equivalent of about 110,000 inmates.

The California Legislature dominated by the Democrats and Democrat Governor Jerry Brown are scrambling to transfer 30,000 prisoners to Count Jails rather than let them go. But, how will the counties pay for this transfer?

Last month, Gov. Jerry Brown signed A.B. 109, which shifts to counties the responsibility for incarcerating many low-risk inmates. Up to 30,000 state prison inmates could be transferred to county jails over three years, under the bill; first, however, state officials must agree on a way to pay for it.

Somehow I don’t think California residents when they are subjected to the increased crime and the recidivism of these felons are going to take to kindly to the POLS who are letting these folks go. But, the biggest effect may be the hesitation of business to remain in California where their employees do not feel safe.

Of course, California may decide to not release thousands of felons but transfer them to other states and the counties. But, who is going to pay for this?

California could change the parole rules as well but this would result in more felons out of incarceration and on the streets. – ready to commit more crimes.

Justice Anthony Kennedy, the swing vote on the Court, and a Californian did nothing for his fellow Golden Staters.