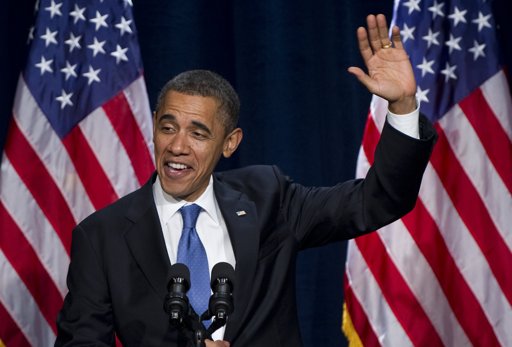 President Obama speaking at a Florida fundraiser in February

Despite improving job growth and an extended Republican primary fight dividing his would-be opponents, President Obama is heading into the general election season on treacherous political ground, according to the latest New York Times/CBS News poll.

At a time of rising gas prices, heightened talk of war with Iran and setbacks in Afghanistan, Mr. Obama’s approval rating dropped substantially in recent weeks, the poll found, with 41 percent of respondents expressing approval of the job he is doing and 47 percent saying they disapprove — a dangerous position for any incumbent seeking re-election.

The poll provides a statistical reminder of how unsettled and unpredictable this year’s political landscape remains. Just one month ago, Mr. Obama reached a critical benchmark by winning approval from 50 percent of Times/CBS News poll respondents, his re-election prospects lifting along with confidence that the nation was finally emerging from the aftermath of the Great Recession.

Mr. Obama’s approval numbers measure his performance against expectations. But elections are choices between candidates, and on that score, he showed greater resilience in the poll.

In a hypothetical matchup against his most likely Republican opponent, Mitt Romney, Mr. Obama had a 47 percent to 44 percent advantage, a statistical dead heat given the poll’s margin of sampling error of 3 percentage points. Against Rick Santorum, the president drew 48 percent compared with 44 percent. In both cases, the difference between the candidates was slightly smaller than it was last month.

In the head-to-head matchups, Mr. Obama also maintained much of the advantage he had built in the last year among important constituencies, including women, although he lost some support among women over the past month, even as the debate raged over birth control insurance coverage.

Remember what I said with the Gallup Poll.

It is all about the economy and the economy in the key battleground states of Virginia, North Carolina, Florida, Nevada and Ohio.