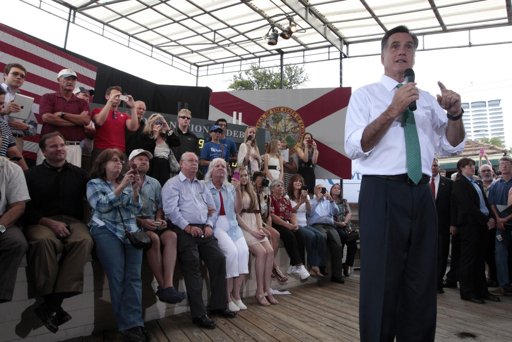 Mitt Romney is out with his first Presidential general election ad and it is called “Day One.”

Mitt Romney’s campaign released its first television commercial of the general election Friday, a spot that outlines a series of “day one” goals for a Romney presidency.

The ad, expected to run in Iowa, Ohio, North Carolina and Virginia, features a narrator speaking over stock footage of the American heartland and Romney on the campaign trail, outlining what “a Romney presidency would be like.”

The campaign is expected to spend $1.3 million on the commercial, according to NBC News, a relatively small purchase. The Obama campaign, by comparison, is in the midst of a $25 million television campaign.

Romney spoke about the commercial on the campaign trail Thursday, telling reporters in Jacksonville that unlike one of the Obama campaign’s ads critical of his tenure at Bain Capital, his commercials would take a positive tone.

Here is the ad embedded below:

A good first start for Romney and definitely a different tone from President Obama.

But, Romney is NO cream puff and will go negative when and if it is required – probably later in the summer.