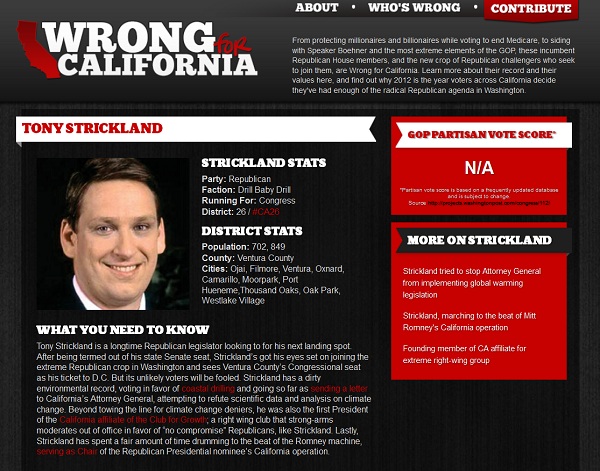 The California Democratic Party who paid for this website Wrong for California has it WRONG about California State Senator Tony Strickland.

Tony Strickland is a longtime Republican legislator looking to for his next landing spot. After being termed out of his state Senate seat, Strickland’s got his eyes set on joining the extreme Republican crop in Washington and sees Ventura County’s Congressional seat as his ticket to D.C. But its unlikely voters will be fooled. Strickland has a dirty environmental record, voting in favor of coastal drilling and going so far as sending a letter to California’s Attorney General, attempting to refute scientific data and analysis on climate change. Beyond towing the line for climate change deniers, he was also the first President of the California affiliate of the Club for Growth; a right wing club that strong-arms moderates out of office in favor of “no compromise” Republicans, like Strickland. Lastly, Strickland has spent a fair amount of time drumming to the beat of the Romney machine, serving as Chair of the Republican Presidential nominee’s California operation.

Strickland is currently in the California Senate and was NOT term-limited out of office. And, Strickland could run for re-election in 2012, but chose to run for Congress instead.

You would think a state party could get the basic facts straight, especially about an incumbent legislator.

Note to the California Democrats: Next time you are going to mock someone, at least have your FACTS straight.

One thought on “CA-26: California Democratic Party Strikes Out On Tony Strickland”