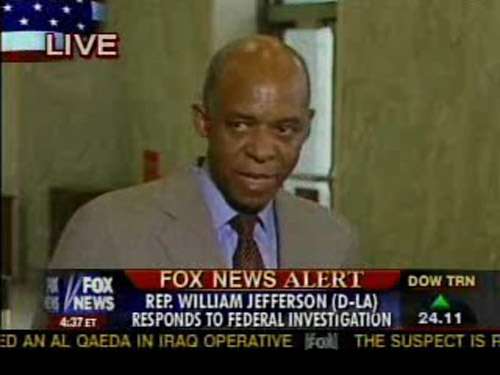 A Democratic congressman facing a bribery probe after police found $90,000 in his freezer denied wrongdoing on Monday and said he would not step down from his congressional seat.

Speaking to reporters, Louisiana Rep. William Jefferson said he could not discuss details of the pending federal investigation.

Jefferson again declared his innocence and said, “I expect to continue to represent the people who sent me here.”

FBI investigators raided Jefferson’s office over the weekend and disclosed that they have videotaped the New Orleans lawmaker accepting $100,000 cash intended as a bribe for a Nigerian official.

The FBI also said in a court affidavit that they found $90,000 of that money hidden in a freezer in his house.

Attorney General Alberto Gonzales, asked by reporters for justification for conducting the FBI search on Capitol Hill, said he could not discuss details of the investigation. But he added, “I will admit that these were unusual steps that were taken in response to an unusual set of circumstances.”

Former associates have said that Jefferson accepted more than $400,000 in bribes to help them sell telecommunications technology to Nigeria and other West African countries.

This MORON better resign and plead out this case. Otherwise he is cuddling with bubba in Club Fed for a long time

Maybe he can play the race card or the TIN FOIL card?

Expose the Left has the video: Jefferson Speaks To The Press; Denies Wrong Doing (VIDEO)

During Hurricane Katrina relief efforts Congressman Jefferson had two trucks, one helicopter, and several members of the national guard take a laptop, several suitcases, and a refridgerator type object out of his house.

FBI agents load the back of a minivan at the Rayburn House Office Building â€˜horseshoeâ€™ entrance on Sunday, May 21, 2006 on Capitol Hill in Washington. To the right of the frame are members of the U.S. Capitol Police. Saturday evening, May 20, 2006 and into Sunday, May 21, 2006 agents from the FBI searched the offices of Rep. William Jefferson, D-La.