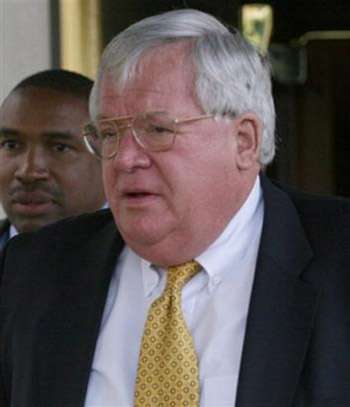 ASSocated Press: Some lawmakers wary of fight over FBI raid

Some lawmakers are warning of a voter backlash against members of Congress “trying to protect their own” if party leaders keep escalating a constitutional dispute over the
FBI’s raid of a representative’s office.

Yet not long after House Speaker Dennis Hastert and Minority Leader Nancy Pelosi demanded on Wednesday the bureau return documents it took, White House aides were in talks with Hastert’s staff about the possible transfer of the material, perhaps to the House ethics committee, according to several Republican officials.

The goals of any transfer, they said, would be to deny the documents both to prosecutors and to Rep. Willliam Jefferson, a Louisiana Democrat ensnared in a bribery investigation, until the legal issues surrounding the weekend search of his office are resolved. The officials spoke on condition of anonymity, citing the confidential nature of the discussions.

The confrontational approach by Hastert, R-Ill., and Pelosi, D-Calif., did not sit well with some colleagues.

The confrontational approach berating the FBI does NOT sit well with the VOTERS.

After all, they found the cold hard cash in Representative Jefferson’s home freezer and the FBI obtained a search warrant for his Congressional office that was signed by a federal judge.

How is Representative Jefferson any different than Flap or you?

Even the Washington Post has a piece dismissing any constitutional issues.

“Criticizing the executive and judicial branches of our government for fully investigating a member of Congress suspected of criminal wrongdoing sends the wrong message and reflects poorly upon all of Congress,” Rep. Barbara Cubin (news, bio, voting record), R-Wyo., said in a statement. “They should not expect their congressional offices to be treated as a safe haven.”

A GOP colleague, Sen. David Vitter of Louisiana, said the public “will come to one conclusion: that congressional leaders are trying to protect their own from valid investigations.”

While some lawmakers contended the executive branch overstepped its authority, Senate Democratic leader Harry Reid of Nevada has declined to condemn the search.

“I’m not going to beat up on the FBI,” said Reid, a frequent critic of the White House’s use of executive power.

In my opinion, the Post is too easy on Congress. I don’t even think the uproar is “understandable”. Jefferson resisted that subpoena for eight months without Congress making any effort to force him to comply. If the rule of law truly applies to everyone, then the FBI had to seek a search warrant to seize the materials that Jefferson and the Congress refused to cooperatively release.

Clearly, the leadership of both parties in the House played chicken with the FBI on the Jefferson subpoena, and now want to cry foul after the FBI ran into them head-on. Their cries of indignation appear to be some sort of ersatz distraction from their responsibility in obstructing the Department of Justice probe into serious corruption on Capitol Hill. They will quickly find out that the American people have no sympathy for those who sell us out for bribes, and little for those who protect them from detection.

In case House leadership is too dense to figure even that out, let me be more blunt: this argument is a loser. Drop it now, or risk being seen, justifiably, as an arrogant enabler of public corruption.

Speaker Hastert acts like a politician who WANTS to be defeated.

Remember the First Plank of the Republican Contract with America?

On the first day of the 104th Congress, the new Republican majority will immediately pass the following major reforms, aimed at restoring the faith and trust of the American people in their government:

Flap wonders if the rest of the GOP House agrees?

Stay tuned for the damage control……

One thought on “Representative William Jefferson Watch: “Trying to Protect Their Own””