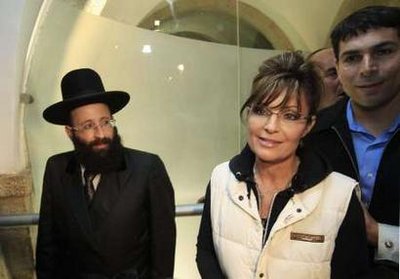 Weekly Standard Editor Bill Kristol was among Sarah Palin’s earliest Washington admirers, and helped bring her to the national stage, but he said this week that while he still admires her, he questions her choices and doesn’t think she should be the Republican nominee for president. (…)

But Kristol — one of her key boosters — went on to raise many of the same questions that have undercut her prospects inside the Republican Party.

“When she quit as governor of Alaska, that was a questionable move from her point of view, but I thought at least then that she would come to the mainland and really participate in the national debate,” he said. “Instead, [it] turns out that she loves Alaska, which is to her credit  — but then I don’t know why she quit as governor.”

“She has a very shrewd judgment about politics and policy and very good instincts — but she hasn’t done what Reagan … did, which is really educate himself over a number of years,” Kristol said.

Sarah has not been polling very well and it is the general consensus that Obama would wipe her out in just about every state. As I have said, I like Sarah, but 2012 is not her year. She has plenty of time to grow, raise her family and prepare herself for a run in the future – if that is what she wants.