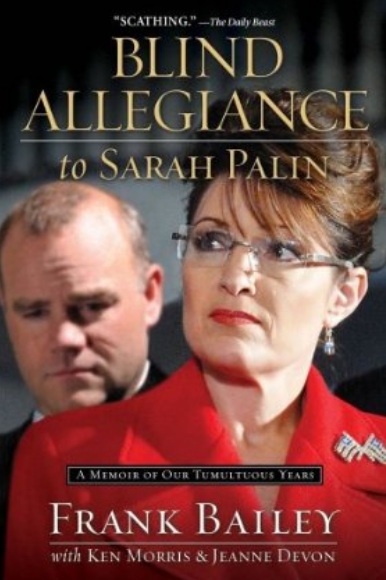 Blind Allegiance to Sarah Palin: A Memoir of Our Tumultuous Years by Frank Bailey, Ken Morris and Jeanne Devon

I suppose Sarah Palin probably wishes she did not share too much with Frank Bailey.

The next big tell-all book about ex-Alaska Guv Sarah Palin drops Tuesday and the hook on “Blind Allegiance to Sarah Palin” is juicy: It is based on Palin’s own words, in the form of thousands of emails she wrote to co-author and longtime former aide Frank Bailey, a self-described Fox News-watching Republican.

“This book is littered with her words — and we took nothing out of context,” co-author Ken Morris, a Marin County resident and self-described progressive, told Comrade Marinucci and I Monday.

“There were so many more shocking revelations that Frank wasn’t comfortable putting in,so we didn’t. He wanted to tell the story about what was wrong as opposed to things about affairs and legitimacies and diet pills. Yes, he wants people to know what kind of person Sarah Palin is like, because that is important,” Morris said.

Morris described Bailey as “a whistle-blower.” And his story is intended to be a warning about unvetted politicians slipping through the process. “I’m really critical of how we’re doing politics now.”

“Sarah Palin becomes sort of symbolic of people like Donald Trump, or of anybody out there who we don’t vet properly,” Morris said. “It’s just a searing indictment of (GOP presidential nominee) John McCain. We leave no doubt that there was zero vetting” of Palin prior to her becoming the Republican VP nominee in 2008.

But, on the other hand, Bailey did relate that the rumors about Palin not being the mother of Trig (and her daughter Bristol was): “She did have Trig,” Morris said. “(Bailey) went to see Trig the morning of his birth.”