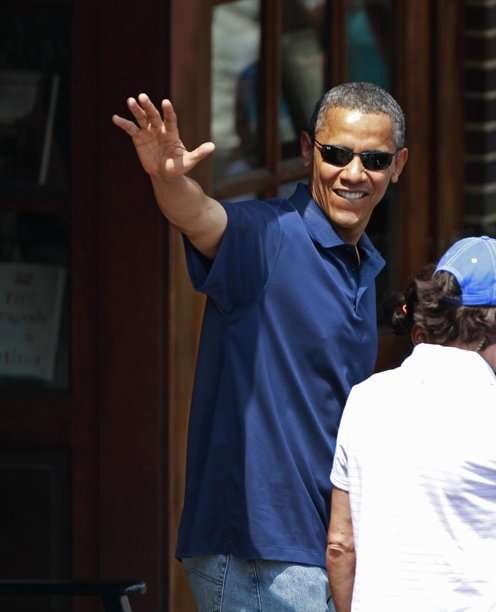 President Barack Obama, with his daughters Malia Obama and Sasha Obama, not seen, waves as they leave the Bunch of Grapes book store in Vineyard Haven, Mass., Friday, Aug. 19, 2011, during a family vacation

Well, the President will have to make up his mind soon. Berating a do-nothing congress or blaming President George W. Bush will NOT work.

Here we come to Barack’s dilemma.

The nation he leads is facing a deficit-debt crisis that comes of an inescapable truth: Whether we are talking about commitments to go to war to defend scores of nations or commitments to entitlement and Great Society programs such as Social Security, Medicare, Medicaid, earned income tax credits, food stamps and Pell grants, we Americans have handed out promissory notes we no longer have the means to meet.

We can no longer deliver what we have promised.

We are running deficits of 10 percent of gross domestic product with a national debt over 100 percent. We are on the path that Italy is following, which is the path that Greece pursued.

We are an overextended empire and commonwealth facing strategic and fiscal bankruptcy. If Obama is to lead the nation out of the crisis it confronts, he has to preside over a downsizing of the welfare-warfare state – the same state that sustains his base.

Not to worry, we are told. When the lazy days of summer are over, Obama will present Congress with his big plan for resurrecting the economy and ensuring the long-term solvency of the nation.

Obama’s September program – indeed, any credible plan to revive the economy and bring our books into balance – has to include a rollback of U.S. commitments at home and abroad.

Yet, domestically, this cannot be done without reducing future Social Security, Medicare and Medicaid benefits, and cutting and capping the social programs of the Great Society. Moreover, half the nation cannot freeload forever, as is the case today, contributing nary a dime in federal income taxes.

And such reforms must adversely impact most Obama’s political and personal base.

If he proposes downsizing the government and cutting and capping social programs, his most loyal constituents rise up against him.

I think Obama will continue to vote “present” while blaming the GOP House. And, Obama will propose more spending and taxes on Warren Buffett and the rich.