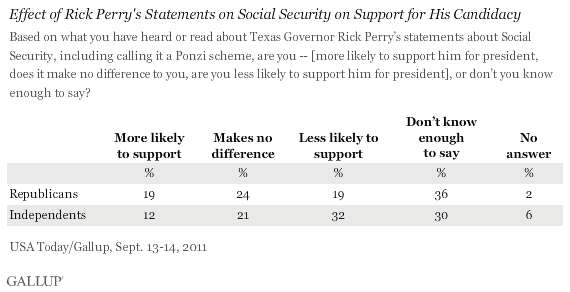 Yes, according to the latest Gallup Poll.

Texas Gov. and presidential candidate Rick Perry’s comments on Social Security, which include calling it a “Ponzi scheme,” appear to be a non-issue for most Republicans. However, they could cost him support with independents should he ultimately win the 2012 Republican presidential nomination. As many Republicans say they are more likely to vote for Perry for president because of his views on Social Security as say they are less likely — 19% each. Among independents, 12% are more likely to vote for him and 32% less likely.

These results are from a Sept. 13-14 USA Today/Gallup poll, conducted less than a week after Perry made his comments about Social Security during the Sept. 9 Republican presidential debate — repeating something that appears in his book “Fed Up,” published last year. Perry’s chief rival for the Republican presidential nomination, Mitt Romney, has subsequently jumped on the issue as a way to paint Perry as out of touch with mainstream views and unelectable.

In fact, Perry’s statements on Social Security are more likely to harm his campaign indirectly by weakening his perceived viability than they are to turn off Republicans who disagree with his views. In contrast to the 19% of Republicans who say they would personally be less likely to support Perry over his Social Security views, 37% believe those views would hurt his chances of being elected president if he were the GOP nominee. Just 17% say they will help his chances.

I think most American voters understand how current social security recipients are not drawing upon funds that they paid into the system. They realize it is the young folks who are having money withdrawn form their pay checks that is funding their retirement.

But……social security has been a successful program and Texas Governor Rick Perry may do OK with Republicans in a primary election but will struggle in a general election unless he clarifies his remarks.

President Obama and his media meisters will try to scare senior citizens (who vote in great numbers) into thinking that Perry will end Social Security. Perry and the Republicans cannot allow this to happen.

Independents tilt even more strongly toward perceiving the issue hurts rather than helps Perry’s electability, 40% vs. 11%.

The majority of Republicans DO want to preserve Social Security.

Rick Perry will “walk back” his comments on social security and develop a Paul Ryan type plan to “save” the system. If Perry does not, he will be attacked unmercifully by Mitt Romney in Florida where there are many social security recipients who will vote in the early GOP primary election. Note this poll on Republicans is early without the benefit of a negative Romney media campaign.

Perry will not have to worry about the Democrats spinning his statements on Social Security because he will not be the GOP nominee.