Day By Day by Chris Muir
Chris, we will never know where the Fast and Furious gun details are since the President has exerted “Executive Privilege” in order to save Eric Holder’s ass.

The flap over the Attorney General and contempt of Congress has yet to be played out.

On the other hand….. 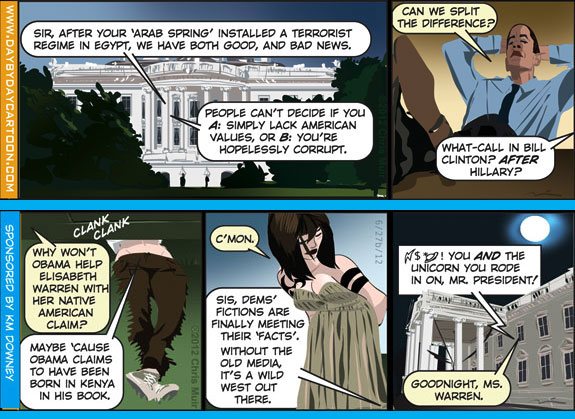 Chris, everyone is wating for tomorrow’s Supreme Court ruling on ObamaCare.

Fortunately, for Attorney General Eric Holder his machinations with Fast and Furious may be lost in the media frenzy. But, this issue will come back to bite the Obama Administration.

The Fast and Furious scandal WILL be tied into the President’s illegal immigration policy and further alienate voters in Colorado and Nevada – key battleground states for the November general election.

Exerting Executive Privilege will NOT postpone the angst or investigations over Fast and Furious.

Didn’t Obama and Holder learn anything from Nixon and the Watergate Scandal?

Chris, there is plenty to be “dressed up” about with the imminent ObamaCare SCOTUS decision and the House voted contempt of Attorney General Eric Holder over Fast and Furious.

The Fast and Furious investigation has finally handed House Republicans a prize they’ve long sought: a legal smackdown of the Obama administration.

Speaker John Boehner (R-Ohio) was able to show skeptical conservatives that his spine could stay stiff under pressure from President Barack Obama and Attorney General Eric Holder by locking arms with Rep. Darrell Issa (R-Calif.) on a contempt of Congress vote Wednesday. There was no daylight — at least publicly — between Boehner and Issa, a dynamic the White House was desperately seeking.

It is certain that some Americans will be “PISSED” over the decisions.

Chris, I don’t think we have seen the half of it with Attorney General Eric Holder.

When Holder leaves office, the chickens will really come to roost.