So, who is left in the CA-26 race (filing opened yesterday and will close on March 9).

It has also been rumored that Assemblywoman Julia Brownley, a Democrat, who represents most of Oxnard and Port Hueneme is also looking at the race.

And, I maintain that ultimately (by the ninth anyway), Rep. Brad Sherman who is in a contentious race against Rep Howard Berman will move from CA-30 in the San Fernando Valley out to Ventura County.

But, what about Linda Parks, the Ventura County Supervisor who while a registered Republican says she wants to run an “independent or bipartisan” campaign? Here she is saying such at her announcement:

This was all good and as Timm Herdt over at the Ventura County Star points out – Parks had the best of both worlds. She could be a “registered” Republican yet be designated on the ballot that she did not identify with either party – in other words she was an independent.

But, the election law changed Monday – just in time for the opening of the filing period.

So, Steve Bennett’s withdrawal has shaken up Linda Park’s plans. Parks will either have to change her registration to “Decline to State,” from Republican or be listed as “prefers Republican Party on the ballot.”

Guess we will find out soon – at least by the 9th of March.

No big surprise to me since Bennett was rumored to be getting an inordinate amount of pressure from the Ventura County Public Employee Unions to stay in his safe Ventura county Supervisor District. Filing today for Congress, I believe opens today.

A top Democratic recruit for the swing 26th Congressional District shocked supporters Saturday by dropping out of the race, one day after party leaders touted his race as a top pick-up opportunity.

Ventura County Supervisor Steve Bennett, who was the top candidate for a pre-primary endorsement recommendation, announced during the state Democratic Party Convention in San Diego that he will drop his congressional candidacy to run for re-election to the Board of Supervisors.

So, now will Rep. Brad Sherman jump into this race?

Or, will Democrats coalesce around Ventura County Supervisor Linda Parks? Might Parks re-register as a Democrat?

My bet is that Rep. Brad Sherman takes a real hard look at this race.

There is also a rumor that California Assemblywoman Julia Brownley, a Democrat, who represents most of Oxnard and Port Hueneme is also looking at the race.

Ventura County Supervisor Linda Parks announced her candidacy for Congress last Saturday at Freedom Park in Camarillo, California
Go ahead, watch the video above and listen to the two challenges that Linda Parks gives to her challengers and the voting public.

I say good luck with that, when traditionally races for Congress have been very partisan and very expensive affairs.

A race for a highly contested Congressional District is NOT a local City Council or County Supervisor which are NON-Partisan and mainly low key races.

It is interesting that Parks who is a registered Republican, but is unclear whether she will run as one as designated on the June 2012 primary ballot, did not mention her opponents – all six of them (Democrats and Republicans a like).

By the way, when Parks beat former California Assemblywoman Audra Strickland (wife of California State Senator Tony Strickland, who has already announced for CA-26) in her 2010 re-election race for Supervisor, I received quite a few mail pieces in my mailbox and somebody paid for those. Parks knows how to campaign and will raise and spend campaign cash like the rest of the POLS.

Has anyone seen Ventura County Supervisor Steve Bennett lately? It has been rumored that he will withdraw from the race and support Parks at the behest of Ventura County Public employee unions.

With Republican Tony Strickland reporting over $300K in contributions on his first day, this is not a good sign for Linda Parks. Also, it shows that the rumor Bennett would get out of the race, maybe just a rumor. 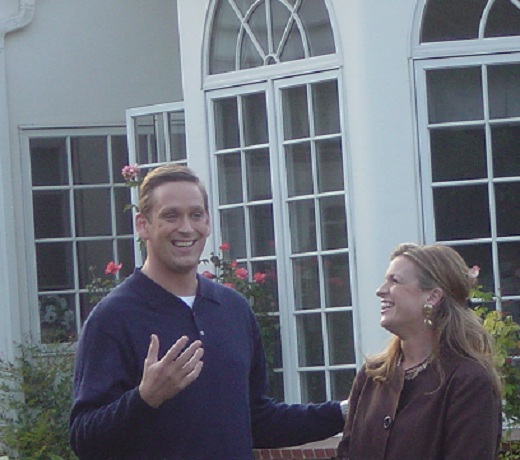 So, here is the announcement.

Sen. Tony Strickland, who represents western portions of the Santa Clarita Valley in the California Senate, has scheduled a press conference to announce his candidacy for Congress.

Strickland’s campaign announcement is calendared for Tuesday morning, Jan. 17, at the Aviation Museum in Camarillo.

I don’t why there is a hurry to announce, but it could be that politics in Ventura County is becoming like musical chairs. The filing deadline is March 9.

First, there is the rumor that Democrat Rep. Brad Sherman will move to run in the new CA-26. This will avoid a nasty June primary election against Democrat Rep. Howard Berman.

Then, there is former Democratic Assembly Speaker Bob Hertzberg who has said (more or less) that he is running in Tony Strickland’s California State Senate District where another Democrat State Senator Fran Pavley (Agoura Hills) will be the incumbent.

So, Strickland will announce, but I hear that local Republicans are worried that Strickland might not be able to beat Ventura County Supervisor Linda Parks who is going to run as an independent (where in the past she has been a registered Republican). Some have suggested that Parks may re-register as a Democrat.

Other sources have told me that the Ventura County Public Employee Unions are pressuring Ventura County Supervisor Steve Bennett to drop out of his previously announced decision to run in CA-26.

The unions and local Democrats are worried that Republican Ventura County Fire Chief Bob Roper would easily win Bennett’s seat, should Bennett vacate it to run for Congress. I guess the LEFT wants to protect Bennett’s seat and he has the campaign cash to do so. So, will Bennett withdraw?

In talking to a number of Republican and Democratic activists, it is clear that nobody is happy with the previously speculated big three candidacies of Strickland, Parks and Bennett.

I would not be surprised to see Rep. Brad Sherman to take a look at this race and I have heard Republicans are talking to Michael Reagan, the son of the former President.

So, it is all complicated. Plus, add in four other candidates (including two Hispanic Democrats from Oxnard) and the top two election system.

This race is going to be a whirlwind…..

Today, Ventura County Supervisor Steve Bennett, a former Ojai High School teacher and administrator will announce he will run for Congress next year. The Ventura County Star has the full story.

Ventura County Supervisor Steve Bennett has scheduled a speech at Patagonia headquarters at noon today at which he is expected to announce he will be a candidate for Congress next year.

Bennett, a Democrat, is scheduled to speak with employees of the renowned Ventura-based outdoor gear company, and sources close to the supervisor said this morning he will make his announcement at that time.

The announcement will end months of intense speculation as Bennett, who will be forced to end his service on the Board of Supervisors, has weighed the pros and cons of staking his political future on a run for the new 26th Congressional District seat.

He will join Moorpark City Councilman David Pollock and Westlake Village businessman David Cruz Thayne as announced Democratic candidates in the race, which is expected to be highly competitive and attract national attention as one of the nation’s key congressional battlegrounds in 2012.

No Republican has yet announced, as potential candidates await an announcement from Rep. Elton Gallegly of Simi Valley as to whether he will choose to seek a 14th term by running in that district.

My bet, although it is not the conventional wisdom, is that Gallegly will be running against Bennett come November 2012.

Here are the demographics of the 26th Congressional District:

And, how the CD performed:

This race may very well be a key national battleground with a very competitive Congressional District. I look for an expensive campaign easily into the $ millions.