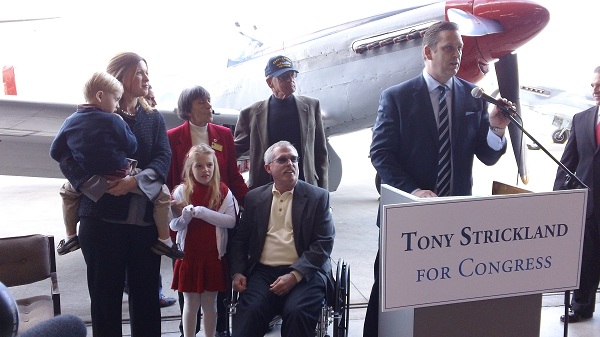 I remember the most important lesson my father taught me: that it’s the duty for every generation to leave their community in a better place than they found it, said Strickland. And that’s why I’m asking to become your next Congressman.

I expect the campaign ahead to be spirited but I’m committed to uniting our community; Republicans, Democrats, and Independents behind policies that create jobs and economic opportunity for those struggling to make ends meet.

Send me to Congress, and I’ll stand up to those who want to weaken our military and threaten our defense related jobs, he continued.

Dependence on foreign energy sources makes our energy prices vulnerable and too reliant on unstable and sometimes hostile foreign regimes. We can no longer afford to fund both sides of a war. Energy independence is truly a national security issue, he added.