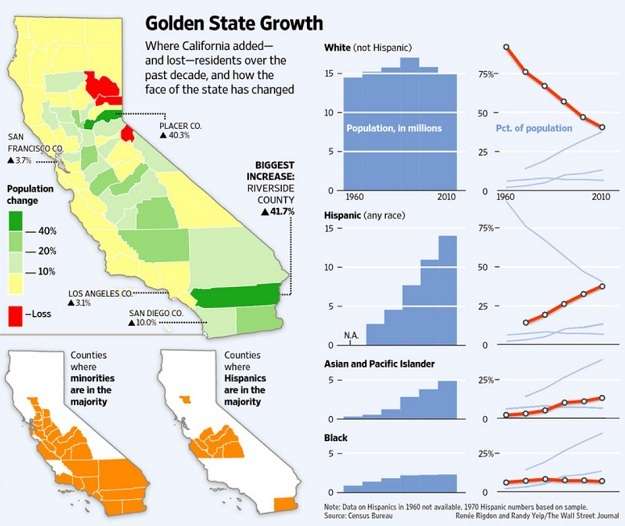 I had posted on this previously here but here are more of the numbers.


California’s Latino population grew nearly three times as much as the state as a whole in the last decade, making the state home to more than a quarter of the nation’s Latinos, according to a new Census Bureau report.

Latinos, the census said, now are 37.6 percent of all Californians, up more than five percentage points since 2000. That percentage is exactly the same as that of Texas, with both states trailing only New Mexico, at 46.3 percent.

Many states have seen higher Latino growth rates than California, some nearly 150 percent, such as Alabama and South Carolina.

Latinos now trail non-Latino whites in California by about four percentage points. They are expected to become the state’s largest ethnic group by mid-decade.

This will mean more Hispanic officeholders as the California Redistricting Commission draws new Legislative and Congressional boundaries based on the census. It will also mean the California GOP may shrink further into irrelevancy like New York, Massachusetts and Maryland since the Republican brand has been tarnished by the national party’s postion on illegal immigration. 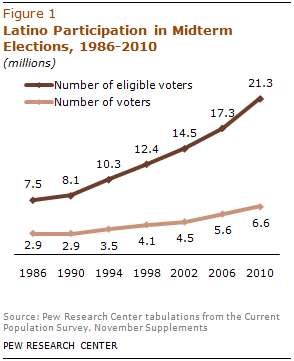 
More than 6.6 million Latinos voted in last year’s election — a record for a midterm — according to an analysis of new Census Bureau data by the Pew Hispanic Center, a project of the Pew Research Center. 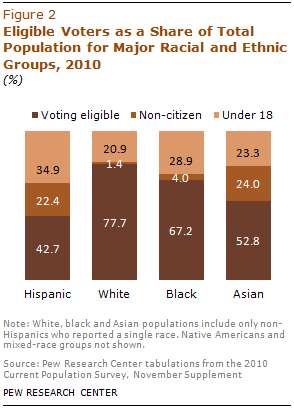 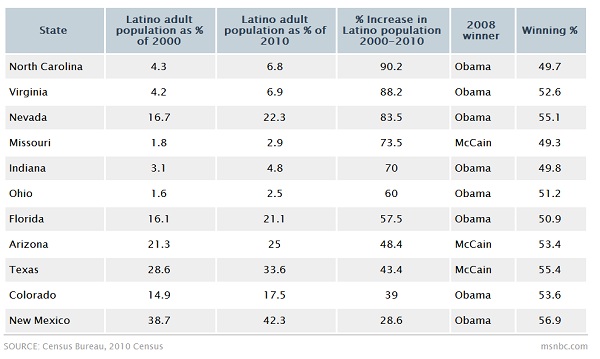 Yes and President Obama will exploit it in 2012.

Hispanic population. Latinos made up half of all U.S. population growth in the past decade, by far the fastest growing group. Hispanics have nearly doubled to make up 16% of the country. We’ve said it here before, and now with the new Census numbers out it’s worth repeating: Latinos are already a serious political force in America and their influence will only get bigger. And that could be problematic for Republicans on a presidential level, because overwhelmingly right now, they prefer Democrats. Obama won Latinos 67%-31% in 2008, and they made up just 9% of the electorate. In the 2010 exit polls, when Republicans swept Democrats out of the U.S. House, Hispanics still preferred Democrats by a similar 64%-34% margin. And they made up just 8% of the electorate. In fact, look at the states out West with large Hispanic populations and how Democrats performed out West vs. the Midwest. In states with high Hispanic populations, Democrats were able to keep their losses to a minimum, holding on to Senate seats in Colorado and Nevada, keeping California fairly blue and holding on to House seats in Arizona they should have lost. As one Republican operative said to us in April 2010: “We have problems, clearly, with Hispanics,” the operative said. “If we do not manage an immigration bill appropriately, and we alienate Hispanics, Obama’s going to run up his numbers in the 70s [with Hispanics]. That is not a sustainable model to win.”

The national GOP will soon have to decide on a strategy to reach out to the growing Hispanic population of voters. It will have to be a multi-faceted voter outreach program, while at the same time isolating the growth of illegal immigration, which in turn results (in a decade or so) more Hispanic voters.

As you can see, this will take some finesse.

Or, the GOP can write off most of the Hispanic vote and try to isolate the effects of their numbers to a few states.

There is danger to the Democrats as well, since too much pandering to African-American and Hispanic voters will label them as the NON-white party.

But, for now, President Obama has the advantage going into 2012 and you won’t be seeing too much GOP Presidential campaigning in California.

Well, not really but you get the idea – they have surged in population growth in California.


Latino children for the first time made up a majority of California’s under-18 population in 2010, as Hispanics grew to 37.6% of residents in the nation’s most populous state.

A new U.S. Census report showed the state’s non-Hispanic white population fell 5.4% over the past decade, a continuing trend offset by a 27.8% surge in Hispanics and 30.9% increase in non-Hispanic Asians.

Though in decline, white Californians remained the state’s largest demographic group at 40.1%. But demographers said Hispanics were poised to take the lead.

Underlying the demographic shifts, California grew at its slowest pace in the past decade in more than a century. The population rose 10% to 37.3 million, an increase in line with the national average.

As in California, Hispanics are gaining ground in many other states, such as North Carolina, as whites are on the verge of becoming a minority among all newborn children in the U.S.

What does this mean for California politics when these Hispanic children mature and start to vote? Just as it is now for the very Blue Democratic California – TOUGH.

Since past electoral history has shown a propensity for Hispanics and Latinos to vote anywhere from 60-75% for Democratic Party candidates, the GOP will be at a demographic disadvantage. There are, of course, districts both Congressional and Legislative where their population numbers will not have as great an impact. And, with redistricting by an impartial commission, the GOP will have a chance there.

So, what happened and why did this growth of Hispanics occur?

Easy- the illegal immigrants from Mexico and Central America of the 1980’s to present had children born in the United States as middle-class whites either died or migrated out of the state to Nevada, Arizona or other states like Colorado.


Mr. Frey said the decline of whites and blacks in the decade, as well as the slowdown of Hispanic growth, is partly attributable to more middle-class families leaving pricey California for more affordable places elsewhere. (…)

“I think it’s a middle-class flight,” Mr. Frey said. “California is still very pricey, so to the extent people can get affordable housing they leave.”

But, California is now a no-growth Democratic state which by the way heavily regulates business.

And, the Republicans? They will be a dwindling minority party like in New York, Massachusetts and Maryland.