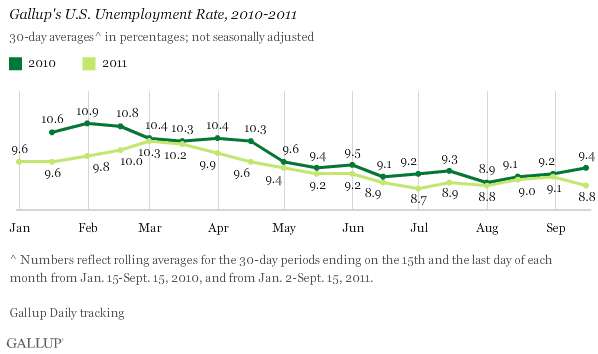 Unemployment, as measured by Gallup without seasonal adjustment, is 8.8% in mid-September — down from 9.1% at the end of August and the same as it was at the end of July. However, the apparent improvement in unemployment from August to mid-September may merely reflect normal seasonal hiring patterns and not be an indication that the employment situation is improving. On the other hand, current unemployment is considerably better than the 9.4% of a year ago.

Underemployment remains stuck at 18.5% in Mid-September.

Offsetting the drop in the percentage of unemployed is an increase to 9.7% in the percentage of part-time workers who want full-time work in mid-September — up from 9.4% at the end of August and its highest level since mid-June. It is also up from 9.2% in mid-September last year. It is this increase, coupled with the downturn in unemployment, that yields the stability this month in the measure of overall underemployment. 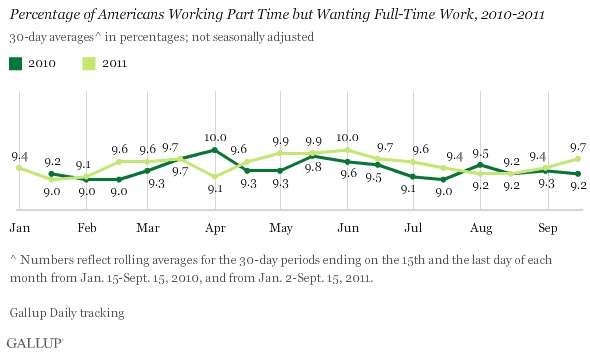 Gallup’s issues a caveat that the improving unemployment rate may not indicate that the employment situation is improving appreciably because of the difference in their polling methodology as compared to the government’s. Gallup maintains that the underemployment rate is a better indicator.

Nearly one in five Americans remain underemployed this year, as was the case a year ago, and the figures are worse for certain subgroups, including 28.9% underemployment for those 18 to 29, 23.1% for those who have not attended college, and 27.8% among blacks.

More Americans are now being forced to take part-time jobs when they really want full-time work. Focusing merely on unemployment instead of underemployment tends to ignore the hardship facing the millions of Americans forced to work part time. The long-term implications of this jobs situation — particularly among specific groups of Americans — for U.S. society as a whole may be more important than any of the major topics currently being debated nationally.

In other words, the employment situation is not improving appreciably.