U.S. unemployment, as measured by Gallup without seasonal adjustment, is 7.3% in mid-October, down considerably from 7.9% at the end of September and at a new low since Gallup began collecting employment data in January 2010. Gallup’s seasonally adjusted unemployment rate is 7.7%, also down from September. October’s adjusted mid-month measure is also more than a percentage point lower than October 2011.

These results are based on Gallup Daily tracking surveys conducted by landline and cell phone with more than 30,000 U.S. adults from Sept. 16-Oct. 15. Gallup’s seasonally adjusted unemployment rate incorporates the .04 upward adjustment used by the U.S. Bureau of Labor Statistics (BLS) in October of last year. The adjustment for September was an increase of .02, which explains the .04 drop in seasonally adjusted employment despite the .06 decline in the unadjusted number.

Underemployment is also down.

Gallup’s U.S. underemployment measure combines the unemployed with those working part time but wanting full-time work. The underemployment rate is at its lowest mid-month or monthly level Gallup has measured since it began collecting employment data in 2010.

Remember this is Gallup’s own polling and is not the official goverment Bureau of Labor Statistics which will later this month have the official unemployment rate figures.

There are three weeks left to the Presidential campaign and while this downward trend is substantial, it may be too little and too late to affect positively the public perception that the American economy is improving.

The decline in unemployment but uptick in the number of Americans working part time but looking for full-time work is likely the result of seasonal hiring, which picks up in the fall for Halloween and continues through the end of the holiday season. Still, seasonally adjusted employment, which accounts for these types of periodic fluctuations, has declined modestly since the end of September. This is a promising sign that employers are adding jobs that will last into the new year.

Gallup’s mid-month unemployment numbers are a good early predictor of the monthly numbers released by the BLS. The decline in Gallup’s unadjusted and adjusted employment rate suggests that the BLS may report another decline when it releases the October data on Nov. 2.

These results are based on Gallup Daily tracking interviews, conducted by landline and cell phone, with more than 30,000 Americans throughout the month. Gallup calculates a seasonally adjusted unemployment rate by applying the adjustment factor the government used for the same month in the previous year. The government adjusted its July numbers downward last year, but made no adjustment in August, which accounts for the increase in seasonally adjusted unemployment despite the decline in the unadjusted number.

U.S. unemployment declined significantly during the first part of the year, but August marks the third straight month with little change in the unadjusted number. Gallup’s estimate of adjusted unemployment has increased by 0.3 percentage points since June. Despite the lackluster jobs growth, August’s 2012 unadjusted and adjusted unemployment are each more than a full point lower than they were in August 2011.

Underemployment is also down a bit.

The pundits anxiously await the BOL official jobs numbers on Friday. If the numbers show a declining unemployment rate, then President Obama may have a bigger bounce in his re-election poll numbers.

However, with the Obama re-election folks trying to loser expectations on the eve of the President’s acceptance speech tonight, I suspect these numbers will be slightly improved or unchanged.

The decline in unemployment seen earlier in the year has not been sustained, with unadjusted unemployment flat over the past three months. Although there is no longer a net loss of jobs, employers are not adding enough jobs to dramatically reduce the unemployment rate.

Gallup’s slight increase in seasonally adjusted unemployment indicates that the unemployment rate the Bureau of Labor Statistics releases on Friday will likely remain flat and possibly increase by a tenth of a point.

Unemployment hovering just above 8.0% could have important implications for President Barack Obama as the election nears. The only incumbent president since 1912 to win his re-election bid when the unemployment rate exceeded 8.0% was Franklin Roosevelt, who was re-elected as the U.S. recovered from the Great Depression. What may matter more, though, is the direction of the unemployment rate, which provides mixed signals for Obama’s chances — improving earlier this year but leveling off in recent months.

U.S. unemployment, as measured by Gallup without seasonal adjustment, was 8.2% in July, up slightly from 8.0% in June, but better than the 8.8% from a year ago. Gallup’s seasonally adjusted number for July is 8.0%, an increase from 7.8% in June.

These results are based on Gallup Daily tracking interviews, conducted by landline and cell phone, with almost 30,000 Americans throughout the month. Gallup calculates a seasonally adjusted unemployment rate by applying the adjustment factor the government used for the same month in the previous year. July data by demographic group are found on page 2.

Unemployment had previously dropped to 7.9% in mid-July, the lowest it has been since Gallup began tracking employment daily in 2010. However, the improvement was short-lived, and unemployment increased during the second half of the month.

Underemployment, however, did decline — for the third straight month in July, to 17.1%, the lowest since Gallup started collecting employment data. Gallup’s U.S. underemployment measure combines the unemployed with those working part time but looking for full-time work. Gallup does not apply a seasonal adjustment to underemployment.

Here is the summary chart for July:

The unemployment rate and workforce participation rate are not improving at a very rapid rate. They are flat at best.

The American economy continues in the doldrums and with the job creation rate also down, the economy will remain a prime Presidential campaign issue.

U.S. unemployment, as measured by Gallup without seasonal adjustment, was 7.9% in mid-July, down 0.1 percentage points from June and May. Gallup’s seasonally adjusted unemployment rate also declined 0.1 points, to 7.7% in mid-July.

These results are based on Gallup Daily tracking surveys conducted from June 15 to July 15, including interviews with more than 30,000 U.S. adults — 68.0% of whom are active in the workforce. Gallup’s seasonally adjusted unemployment rate incorporates the adjustment used by the U.S. Bureau of Labor Statistics in the same month of the previous year.

And, underemployment has decreased to the lowest levels since 2010.

There has NOT been any dramatic improvement in the American unemployment rate for the past three months. Although the rate is a little better than last year, it is not good news for folks looking for a job or incumbent politicians 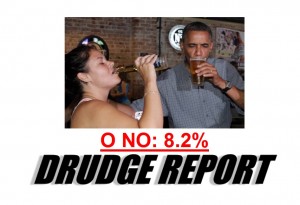