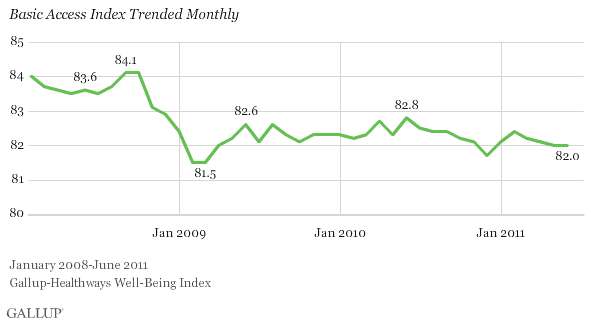 More Americans continue to struggle to access basic necessities than before the 2008 economic crisis. The U.S. earned a Basic Access Index score of 82.0 in June — about on par with the low point of 81.5 recorded in February and March of 2009 — and down compared with 83.6 measured in June 2008.

The current score is more than two points lower than the highest measured point of 84.1 in October 2008, revealing that nearly 5 million fewer Americans today have access to the basic necessities of life compared to that time.

These findings are based on approximately 29,000 interviews conducted each month from January 2008 through June 2011 with American adults as a part of the Gallup-Healthways Well-Being Index. The Basic Access Index is a 13-item measure of Americans’ access to basic necessities, ranging from food and shelter to clean water and healthcare.

Fewer Americans have health insurance or a personal physician

Americans’ access to health insurance declined the most among the items included in the Basic Access Index. In June 2011, 82.1% reported having health insurance, continuing a steady decline from 85.4% in June 2008. Fewer Americans also report having a personal doctor and visiting the dentist at least once in the last 12 months. “Enough money to buy food at all times in the last 12 months” is also trending lower compared to 2008 and 2009.

I would not want to be an incumbent politician running in 2012. Voters who cannot meet basic needs will eventually lash out at the ballot box.

The idea that the 2008 economic recession is over is a fallacy.

The continued lack of recovery in the Basic Access Index metrics overall in 2011 shows that Americans are still lagging behind prior years in terms of their access to the basic necessities that foster a healthy, productive life. While Gallup has documented the decline in access to health insurance in recent years, important elements of healthcare including Americans’ ability to maintain a personal doctor and visit the dentist have also been casualties of the economic recession. This means millions fewer American adults have those basic needs met now than did before the financial crisis, despite modest improvements found in some areas. These results lend further evidence to the sluggishness of the current economic recovery, and underscore in real terms the health impact of the recession on the lives of American adults.