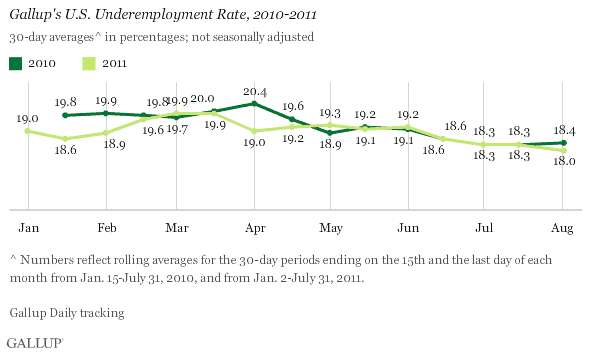 I find it interesting that Chicago Mayor and former Obama Chief of Staff Rahm Emanuel this morning is attacking Mitt Romney for his jobs record in Massachusetts while he was governor. With this jobs record, President Obama could not be re-elected to any office. Voters simply don’t care what Romney did or did not do years ago, but want to know what Obama is doing NOW.

The Gallup Poll unemployment rate is measured differently than the government’s which will be released tomorrow. Stay tuned for that number.

The lack of improvement in year-over-year U.S. unemployment is consistent with the revised GDP results showing anemic economic growth at best during the first half of 2011. The U.S. economy simply has not been growing fast enough to create the number of new jobs necessary to significantly reduce the unemployment rate.

However, there are some bright spots in the jobs arena. Gallup finds unemployment improved among those aged 50 to 64 and among college graduates when compared with a year ago. Similarly, the unemployment situation in the East, West, and Midwest shows modest improvement over last year, while that in the South has deteriorated.

In the more immediate term, the decrease in the number of people working part-time but looking for full-time work suggests employers may be putting more part-time employees in full-time jobs, at least for the back-to-school sales period. This good news is by comparison not only to last month, but also to last year.