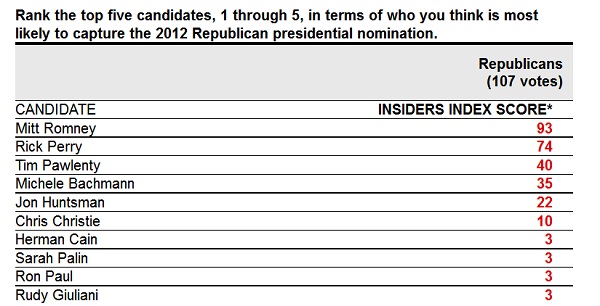 According to the National Journal Poll.

For five consecutive Political Insiders Polls dating back to January, 2010, Romney has held onto his first-place ranking in this survey. And his most recent rating is the highest score he’s achieved in any of the surveys. But as some prospective Republican presidential contenders decided not to make the race–like governors Haley Barbour of Mississippi and Mitch Daniels of Indiana–and GOP White House hopefuls like former governors Tim Pawlenty and Jon Huntsman of Utah have slipped, Perry has rocketed into contention, even though he has yet to declare he’s a candidate.

Pawlenty is ranked as the third leading contender for the nomination, but his fellow Minnesotan, Rep. Michele Bachmann is breathing down his neck in fourth place in the rankings. Two months ago Pawlenty was ranked second and his Insiders Index ranking was more than five times Bachmann’s score. The intervening CNN New Hampshire Republican presidential debate where Bachmann showed passion and Pawlenty punted an opportunity to challenge Romney on health care, apparently made a big impression on Republican Insiders in this relatively fluid contest. Huntsman rounds out the top-five.

At the same time, some of the biggest names in the GOP have now become afterthoughts to lead the party in 2012: former Alaska Gov. Sarah Palin, who remains a popular figure among conservative Republicans, has tumbled to eighth spot in the GOP Insiders ranking. And former House Speaker Newt Gingrich, the architect of the party’s 1994 takeover of the House, has fallen out of the top-ten rankings altogether.

An interesting poll but meaningless, nonetheless since most of these “insiders” work in the business so to speak and have their own favs.

Rick Perry has rocketed to second place and is fast becoming the anti-Romney candidate and he has not even formally announced his candidacy. I think you are possibly looking at the ticket in these two, depending on if Romney can beat Perry in Florida and on Super Tuesday.

I don’t understand how anyone can rate Tim Pawlenty and Jon Huntsman any higher than Ron Paul. None of them are going anywhere and Pawlenty has just pulled his ads from Iowa – just before the Ames, Iowa Straw Poll. Apparently, he is short on campaign cash.

So, there you have it: Romney Vs. Perry or Romney and Perry.