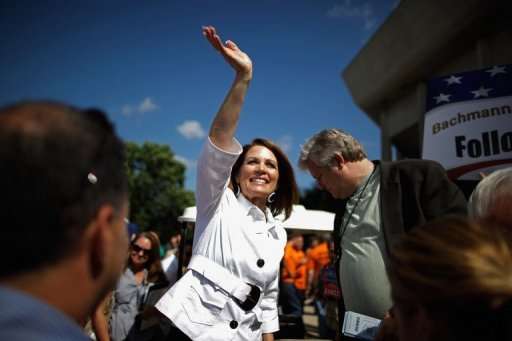 Republican presidential candidate Rep. Michele Bachmann (L) and her husband Marcus Bachmann encourage people to vote for her outside the Hilton Coliseum at Iowa State University in Ames, Iowa. Bachmann won the Iowa straw poll on Saturday, in an early boost for her campaign for the White House

Minnesota Rep. Michele Bachmann has won the Iowa Straw Poll against a competing and non-competing field.

Texas Governor Rick Perry has announced his candidacy for the Presidency at a Red State Conference in South Carolina.

So, what is the question of the hour?

As for Romney, the former Massachusetts governor is proving far more formidable than many imagined. He can sidestep an attack. He can reel off a list of policies in a one-minute answer. And to date he has been the contender who most looked and sounded the part of a presidential nominee. Perry can and almost certainly will try to knock Romney on health care and make the pitch that he, rather than Romney, is the most authentic conservative who can beat Obama. But I don’t think that is going to get him very far. For one thing, their position on issues is not likely to differ substantially.

Moreover, those who won’t vote for Romney, for example, because of health care or because they still can’t trust him on social issues, have already drifted to Bachmann. If Perry simply says, “Romney’s not conservative enough,” the question will still remain: Why Perry?

Perry’s task is therefore to prove himself more forceful, appealing, capable and dynamic than both Romney and Bachmann. Romney’s got a seven-point pitch on jobs; Perry has to be more credible (by stressing his own job creation record). Romney sounds solid on national security; Perry must appear more determined. In the same way that Romney seems more presidential than Bachmann, Perry must seem to be a more vivid, effective combatant than Romney.

Perry’s late entry is also a reminder (both in a positive and negative sense for his own fortunes) that the rest of the field is decidedly un-Southern. Romney, Bachmann and the rest of the field, in speech and manner, don’t rekindle the memory of George W. Bush; Perry does. He’ll have to demonstrate he has appeal to non-Texans. It’s telling he announced in South Carolina, but will he wear well in New Hampshire?

It won’t be easy for Perry to rise to the top of the pack.. Romney is well versed on the issues; Perry has gaps (e.g., foreign policy). Romney is a very experienced debater; Perry’s untested. Romney has a private-sector background to point to; Perry does not. Romney at this point has been fully vetted; Perry is going to have to withstand the downpour of unflattering accounts that question how good his record as governor has been. And voters concerned about electability will no doubt worry that Perry’s accent and Texas pride may not play well in all parts of the country.

Perry will have plenty of money, a record of job creation and a persona that matches up with the Tea Party’s populism. The challenge for Perry is to prove himself a superior candidate and the most effective opponent to go up against Obama in the general election. Can he do it? Well, that is the question of the hour.

Well, the race is on and the media campaigns will begin very soon. Whoever, can best frame the issues on television and perform well in the debates will win.