Gallup found a substantially wider gap in public perceptions of how much responsibility Bush and Obama each bore for the economy when it first asked the question in July 2009, the sixth month of Obama’s presidency. That narrowed by March 2010, caused mainly by a jump in the percentage blaming Obama a great deal or moderate amount, and has since changed relatively little. However, the results from a new Sept. 15-18 USA Today/Gallup poll are the first showing a majority of Americans, 53%, assigning significant blame to Obama. Forty-seven percent still say he is “not much” (27%) or “not at all” (20%) to blame.

I think Americans realized that after the Bush Presidency they must give President Obama a chance and have given him a honeymoon of sorts. But, the bloom has come off the rose.

But, more Republicans are willing to blame Bush more than Democrats to blame Obama, so electorally, this does not help the President’s re-election prospects. 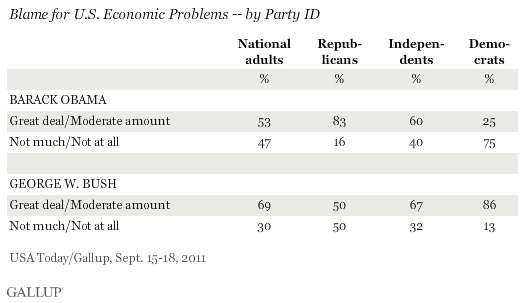 President Obama is now accruing blame for the poor economy. Since President Bush will not be on the ballot, he had better find either an economic solution or a better excuse than it is Bush’s fault (particularly with independent voters).

Former President Bush continues to take a harder hit than President Obama in public perceptions of who is responsible for the nation’s ongoing economic problems. However, that is largely because Republicans are more willing to blame Bush than Democrats are to blame Obama. Because most Republicans and Democrats are going to vote for their own party’s presidential candidate in 2012, this imbalance won’t help Obama much electorally.

More importantly, about 6 in 10 political independents believe both presidents bear considerable blame. That is not good news for Obama. In his re-election campaign, he will likely try to convince independents that although the economy hasn’t markedly improved on his watch, his policies prevented the bad economic situation he inherited from Bush from becoming even worse.

Other Gallup polling confirms that the economy is going to be a treacherous issue for Obama to navigate in the coming year. At 26%, his most recent approval rating on the economy, from August, is his lowest to date, and Americans’ economic confidence remains weakened compared with earlier this year, after the bruising debt ceiling debate over the summer. The public may not see Obama as culpable for the economy to the same degree as Bush, but that won’t be sufficient protection from voters’ wrath if the majority — including 60% of independents — nevertheless considers him highly responsible.