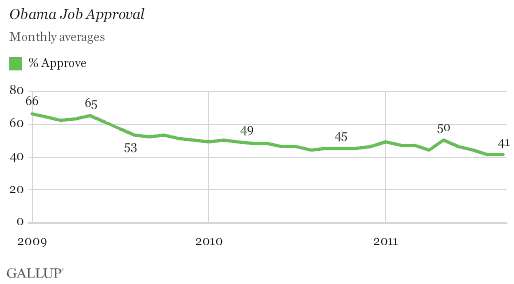 Obama began his term with average approval ratings of 66% in January 2009 and 64% in February 2009. His ratings gradually drifted downward from that point, with a slight uptick in January of this year and again in May, after the killing of Osama bin Laden.

But, is it too early to predict the November 12 Obama re-election?

Thirteen months from now, Americans will vote on whether to give Obama a second term in office. While Obama’s September job approval average may not appear to bode well for him, history shows that approval ratings at this juncture are not strongly predictive of an incumbent president’s re-election chances. Jimmy Carter in 1979 had lower monthly average approval ratings in September of the year before his election than Obama has now. Carter went on to lose his re-election bid. George H.W. Bush’s approval rating in September of 1991 was 68%, second only to Dwight Eisenhower’s 71% in September 1955. Bush went on to lose the 1992 election to Bill Clinton. 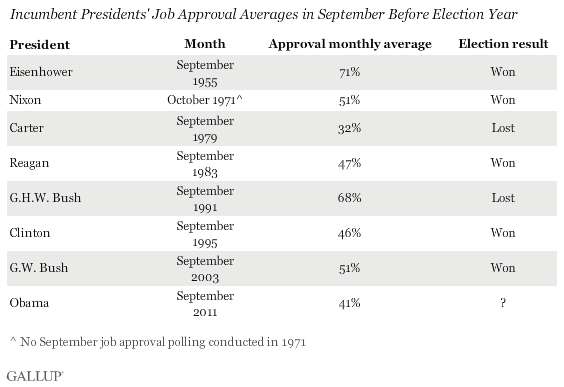 The Demographic chart of Obama approval tells a story.

Obama’s approval ratings vary widely across demographic groups, reflecting the general structure of partisanship in the U.S. population today. Blacks, nonwhites, those with postgraduate educations, Hispanics, young and unmarried Americans, and those living in the East were among the most approving of Obama in September.

Obama’s approval ratings are below average among whites, married Americans, those aged 65 and older, and Southerners.

President Obama is in deep trouble and is looking like a one term President ala Jimmy Carter.

President Obama’s monthly job approval rating remains at 41% in September, tied for the lowest monthly average of his administration. His job rating will become an increasingly important predictor of his re-election chances as each month goes by, although history shows that candidates’ ratings in September of the year before an election can still change significantly in the 13 months leading up to that election. At this point Obama’s ratings are well below the 48% to 50% approval threshold that a president generally needs to be re-elected.

Americans’ views of Obama have become somewhat more polarized over the course of his administration to date. Democrats’ ratings are now higher relative to other groups than they were in 2009, while Republicans’ ratings are lower compared with other groups. Obama’s support among blacks and those with postgraduate education remains high compared with the national average, while his support among high-income Americans and Hispanics has weakened.