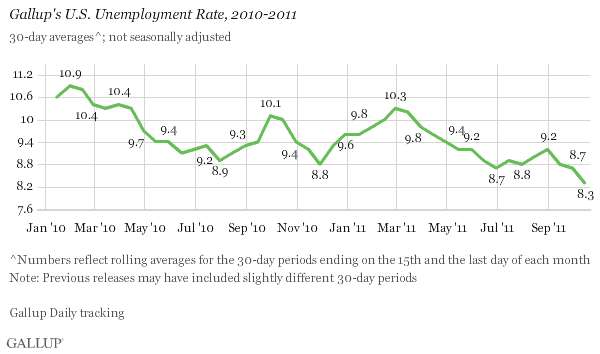 
Unemployment, as measured by Gallup without seasonal adjustment, is 8.3% in mid-October — down sharply from 8.7% at the end of September and 9.2% at the end of August. A year ago, Gallup’s U.S. unemployment rate stood at 10.0%. While seasonal hiring patterns may explain some of this improvement, the drop suggests the government could report an October unemployment rate of less than 9.0%.

And, underemployment is down sharply.


Underemployment, a measure that combines the percentage of workers who are unemployed with the percentage working part time but wanting full-time work, is thus at 17.5% in mid-October, down sharply from 18.3% at the end of September — and its lowest measurement of the year. 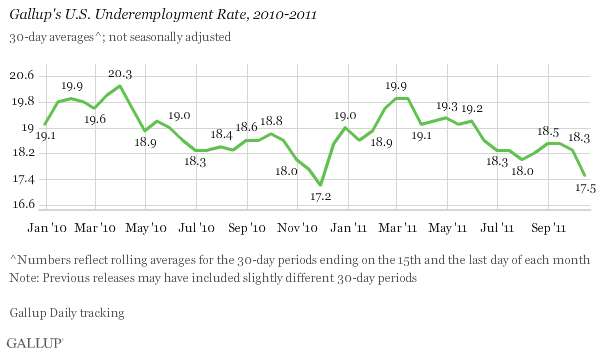 But, Gallup polling is not the government and they issue their poll with caveats.

The sharp drop in Gallup’s unemployment and underemployment rates may partly result from seasonal factors. Halloween has become the third-largest sales season for many retailers, who are likely increasing their staffing accordingly. In addition, some stores may have been minimally staffed and are beginning early to add employees for the holidays. The surge on Wall Street during early October may also have provided some relief for business owners as they evaluate the prospects of the U.S. economy and their potential sales. Whatever the reasons, Gallup’s Job Creation Index tends to confirm this improvement in the job market because it has been near its highs for the year in early October.

Of course, the precipitous and counterintuitive nature of this sharp improvement in the U.S. job market, as measured by Gallup over the past couple of weeks, means it could be something of an aberration that will dissipate during the weeks ahead. It might even have been missed if not for Gallup’s Daily tracking. But for now, this job market improvement appears real — and, in turn, that implies the Main Street economy may be somewhat stronger than Wall Street generally perceives.

So, while this is good news about the American economy it may be too soon to cheer and may be short-lived at that.

One thought on “Poll Watch: U.S. Unemployment Rate Decreases Sharply in Early October to 8.3% – But…..”