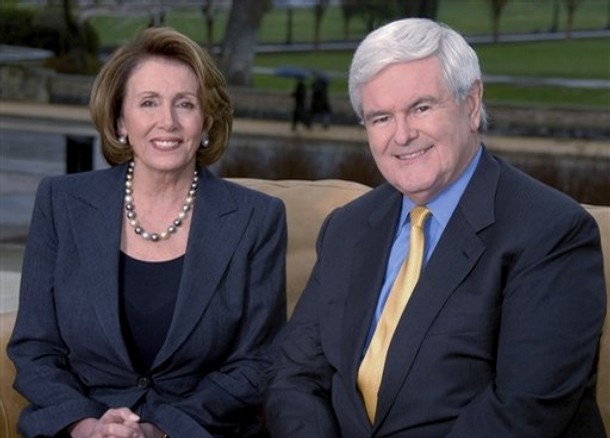 Former Speakers of the House Nancy Pelosi and Newt Gingrich

Pelosi has suggested in two interviews that she knows something that could prevent Gingrich from becoming president, but her office said the California Democrat doesn’t have any secrets about Gingrich, who has shot to the top of national Republican polls after winning the South Carolina primary.

“The ‘something’ Leader Pelosi knows is that Newt Gingrich will not be President of the United States. She made that clear last night,” Pelosi spokesman Drew Hammill said in a statement.

“Leader Pelosi previously made a reference to the extensive amount of information that is in the public record, including the comprehensive committee report with which the public may not be fully aware,” Hammill said.

Pelosi made headlines on Tuesday when she told CNN Gingrich would not be president, and that “there’s something I know.”

In an interview in December, Pelosi also drew attention by suggesting there was information that could come out of her office that could damage Gingrich. Pelosi suggested it was related to the House ethics investigation of Gingrich; Pelosi served on the panel looking into Gingrich.

“One of these days we’ll have a conversation about Newt Gingrich,” Pelosi said at the time. “When the time is right. … I know a lot about him. I served on the investigative committee that investigated him, four of us locked in a room in an undisclosed location for a year. A thousand pages of his stuff.”

But on Wednesday, Hammill repeated that all of the information from the investigation is in the public realm.

You know darn well that if there was any additional dirt, Mitt Romney would be using it now in Florida.

Pelosi and the Democrats are just doing a little misdirection.