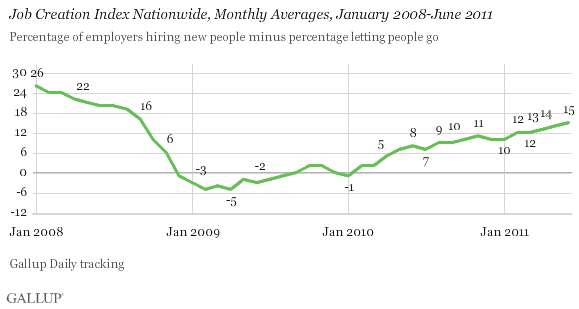 The Job Creation Index has increased steadily if marginally in 2011. This continues a pattern that began after the Index matched its low point of -5 in April 2009, and is consistent with the improvement in the overall U.S. job situation over the past couple of years.

Hiring has increased moderately in 2011.

Here is the graph. 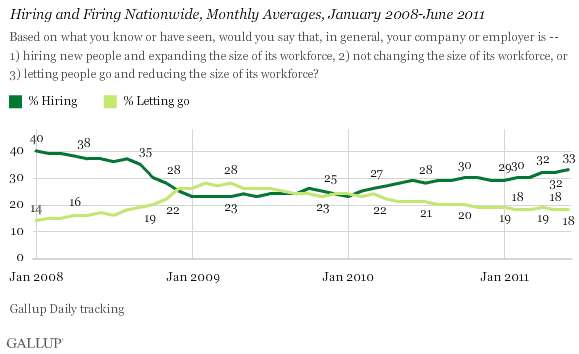 And, what about regional job creation? Hiring patterns are similar. 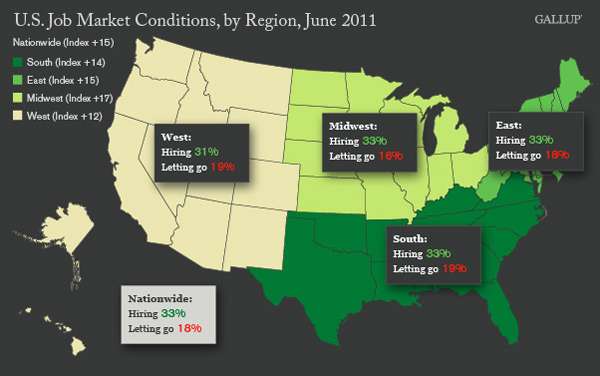 Job creation is slow and has remained so. With vast numbers of unemployed Americans, it is doubtful that robust job growth will be realized before the Presidential race for 2012 begins after this summer.

President Obama will have to run on this record of anemic job growth and high unemployment.

Gallup’s Job Creation Index, at +15 for June 2011, is much improved over June 2010’s +8 and June 2009’s -3 readings. One reason for this improvement, according to employee reports, is that the nation’s employers are holding on to their workers; the percentage currently letting people go is just about where it was in June 2008. Additionally, the percentage reporting their employer is hiring has increased slightly during the first half of 2011.

However, companies are still not in a hurry to hire. The percentage saying their employers were hiring in June is down seven points from January 2008, when the recession was just getting underway. New jobs are being created at an anemic pace compared with what is needed to lower the U.S. unemployment and underemployment rates. These job creation trends are consistent with Gallup’s recent unemployment report that shows the current job situation has seen little year-over-year improvement.

These job creation findings are also consistent with the recent trend in jobless claims, whose four-week average is currently 426,750. This is better than the year-ago numbers, but — like the job creation trend — is not enough of an improvement to support a decline in the unemployment rate. In this regard, the modest improvement in Gallup’s Job Creation Index over recent months is also consistent with the consensus among economists that there will be essentially no change when the government reports the June unemployment rate on Friday.
Right now, Gallup’s job data suggest that job market conditions are slightly more positive than the government’s numbers show. Although economists declared the recession over two years ago, job growth has a long way to go, with the current Job Creation Index nowhere near the +26 seen just as the recession was beginning in January 2008.