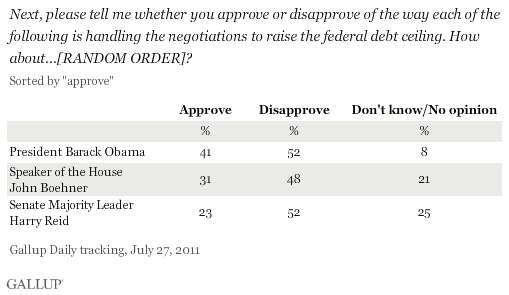 Americans are more likely to approve of the way President Obama is handling the negotiations to raise the federal debt ceiling than they are to approve of the handling of the situation by Speaker of the House John Boehner or Senate Majority Leader Harry Reid, although opinions about all three are more negative than positive.

These results are from a special one night USA Today/Gallup poll conducted July 27, as Speaker Boehner was marshaling support for Thursday’s House vote on his version of a new budget plan.

President Obama’s 41% approval rating on handling the situation is 10 percentage points higher than Boehner’s and 18 points higher than Reid’s. However, more Americans have an opinion about Obama’s handling of the situation than is the case for the other two men, so when those with no opinion are factored out of the results, Obama’s advantage is lessened. Among those with an opinion about his handling of the situation, the president has 44% approval and 56% disapproval, compared with 39% and 61% for Boehner and 31% and 69% for Reid.

Americans are saying a POX to all of the POLS.

What about independent voters?

Tea Party supporters have been among the most vocal participants in the current debt crisis debate. Many observers suggest that the pressure Tea Partiers are putting on newly elected freshman Republican House members is a reason the parties have not been able to strike a debt agreement so far. House Speaker Boehner is attempting to broker a deal to get the debt ceiling raised while at the same time reflecting the intense sentiments of Tea Party followers.

Americans are not approving of any of the parties or POLS. It may be too early to assess the true impact of the situation, unless some financial crisis results. But, for election 2012, this entire matter is a negatve for both sides of the aisle. If anyone thinks the President can claim a victory in this situation, they better read and weep.

Both sides are likely to cut a deal now that it is very apparent, they are both losing the public perception.

It is too early to determine the long-term impact of the current debt ceiling crisis on the political fortunes of President Obama, Speaker Boehner, Majority Leader Reid, and the other politicians who have been in the middle of the unfolding drama. The current short-term data suggest that to date none of those involved receive glowingly positive reviews from the American public. More Americans disapprove than approve of the way Obama, Boehner, and Reid have each handled the situation.

Obama does better than the other two, based in large part on the high approval rating he receives from his fellow Democrats. Boehner receives significantly less loyalty from Republicans, half of whom approve of his handling of the situation. This no doubt reflects the current divisions within the Republican Party, with conservatives and Tea Party supporters pressing for a rigid stance against compromise and tax increases, while other Republicans are more inclined to push for a settlement with Obama and the Democrats. At this point, the former group is the most supportive of Boehner, which suggests that he faces more problems from the moderate wing of his party than from the conservative Tea Party wing. The fact that as many Republicans who do not support the Tea Party say they disapprove of how Boehner is handling the situation as say they approve highlights his leadership challenges.