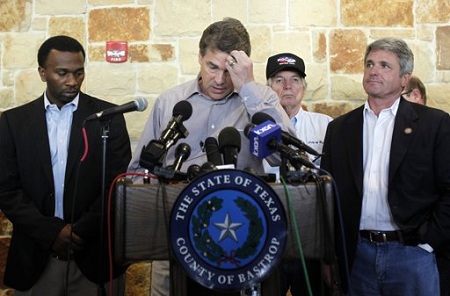 Texas Governor Rick Perry (C) speaks at a media conference in Bastrop, Texas September 5, 2011. An estimated 1,000 homes are being threatened in Bastrop County, just east of Austin, as a 14,000-acre (5700-hectare) wildfire rages out of control, causing evacuations

According to the latest Politico/George Washington University Battleground Poll.

The NBC News/Wall Street Journal poll delivered similar results. Perry is 38 percent of respondent’s first choice for the nomination, followed by Romney at 23 percent, Paul at 9 percent and Bachmann at 8 percent.

These polls are only the most recent to show Perry out in front of the field. Earlier polls from Gallup, Quinnipiac and CNN/ORC International all show a similar picture of the field.

Perry, the most recent entrant into the race, announced his run on Aug. 13, the same day that Bachmann won the Ames Straw Poll in the first-in-the-nation caucus state of Iowa.

Since that high point in her campaign, Bachmann has slipped in the polls.

Bachmann’s former campaign manager Ed Rollins, who stepped down Monday due to health problems, said Perry’s entrance “took a lot of our momentum.”

“Legitimately, it’s a Romney-Perry race,” Rollins said. “I think she’s the third candidate at this point in time, which is way different and better than we thought when we started this thing. She’s very much in this thing.”

The race for the GOP nomination will continue to evolve in September, a month that features three debates, including CNN’s “Tea Party Republican Debate” on Sept. 12 in Tampa Florida.

The Politico/George Washington University Battleground Poll surveyed 1,000 likely voters over the phone and was conducted between Aug. 28 and Sept. 1. The poll has a sampling error of plus or minus 3.1 percentage points.

And, remember that tomorrow evening’s GOP Presidential debate will be held at the Ronald Reagan Presidential Library in Simi Valley, California. This will be the first debate that Rick Perry will mix it up with all of the other candidates. It will be televised on MSNBC starting at 5 PM PDT.