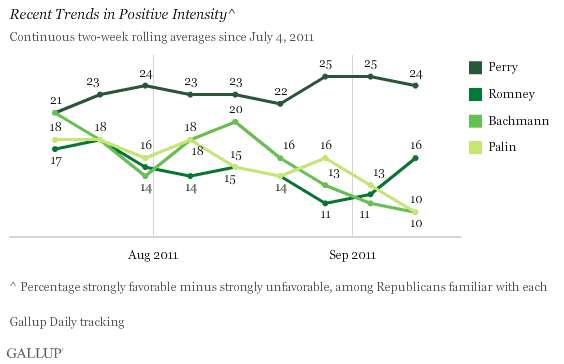 Mitt Romney is the only announced candidate whose Positive Intensity Score has improved significantly in recent weeks. His current 16 is up from 11 in late August and is his highest rating since mid-July, thus narrowing the gap with Perry. Rudy Giuliani, who has yet to decide if he will run, still edges out Romney with an 18.

Sarah Palin and Michele Bachmann have seen significant declines in their Positive Intensity Scores since late August. Palin, who has also not decided whether to run, is down six points, from 16 to 10, and Bachmann is down three points, from 13 to 10. Both women are now at new lows for the year, with Bachmann’s score cut in half since early August.

Of course, this poll was taken before last night, but shows some movement since the Reagan Presidential Library debate the week prior where the Social Security – Ponzi Scheme Flap reared its ugly head. Interesting that Rudy Giuliani continues to poll better than Mitt Romney.

With just under five months remaining before Republican primary voters start casting ballots for the 2012 Republican nomination, Perry continues to generate more positive intensity from Republicans who know him than any other announced or potential candidate Gallup tracks. This is particularly notable because Perry has managed to maintain a strong Positive Intensity Score as his recognition among Republicans has expanded from 55% in July to 75% today. Romney, however, remains better known, and has recently seen his sagging Positive Intensity Score rebound, although he still lags significantly behind Perry on this measure.

The news is not as good for Bachmann, who has lost much of the passionate support she generated as recently as early August. Positive intensity for Palin among national Republicans has also slipped to a new low for the year.

Republicans’ views of Paul, Gingrich, Santorum, and Huntsman all seem to be in a holding pattern at levels seemingly keeping these men out of serious contention for the nomination. Huntsman does particularly poorly in Republicans’ eyes, and is the only candidate tracked whose Positive Intensity Score is a net negative, meaning that more Republicans who know him have a strongly unfavorable opinion than have a strongly favorable opinion.

Cain continues to be an anomaly, scoring high in positive intensity among those who know him, yet unable to push his recognition above the 50% level, and scoring low in trial-heat ballot measures.