No surprise that Iran is admitting that they have been developing or possess a nuclear weapon, is it?

Iranian president Mahmoud Ahmadinejad says that while Iran is already a nuclear state, it has no intention of attacking Israel. Ahmadinejad was interviewed on the eve of his visit to Cairo, where he will attend the 12th Islamic Summit Conference, due to open there on Wednesday.

Before his trip, he gave a long interview to the editor-in-chief of Egypt’s newspaper Al-Ahram. Although Al-Ahram ran the entire interview only in its print edition, excerpts appeared on Egyptian websites.

Ahmadinejad said the world must now treat Iran as a nuclear country. “They want Iran to go back to what it was in the past, but they won’t succeed. They assume we’ll give in to pressure; such thoughts are misguided. We’re already an industrial and nuclear country, a country that has conquered space. For years we have been thinking about sending a human being into space, and we will do that, with Allah’s help. We must ensure development and growth and bring them to pass, and the world must acknowledge our progress,” he said, adding that the best solution was cooperation with Iran.

Mentioning the possibility of an Israeli attack on Iran, Ahmadinejad said that while it might be easy to launch missiles or attack using fighter jets, Iran’s response and defense capability were important in this context.

So, is this the Iran Breakout Capability moment?

Now, what will the United States and other Western nuclear powers do?

How about another round of sanctions?

Will Iran give the Muslim Brotherhood in Egypt a nuclear weapon? How about Hezbollah? Hamas?

Interesting, isn’t it that on the eve of the third and last Presidential debate there is a “leaked” report or an October Surprise about Iran?

The New York Times reports (and the White House denies) that “The United States and Iran have agreed for the first time to one-on-one negotiations over Iran’s nuclear program, according to Obama administration officials, setting the stage for what could be a last-ditch diplomatic effort to avert a military strike on Iran.”

Two of the three assertions in that lead paragraph are demonstrably false.  One-on-one negotiations have been going on for years (most recently, according to my friend “Reza Kahlili,” in Doha, where, he was told, Valerie Jarrett and other American officials recently traveled for the latest talks).  The only news here is that the talks would no longer be secret.  And the notion that only diplomacy can avert “a military strike on Iran” is fanciful.  There are at least two other ways:  sanctions may compel the regime to stop its nuclear weapons program, or the Iranian people may find a way to overthrow the regime, thereby (perhaps, at least) rendering military action unnecessary.

I rather suspect that you don’t have to do anything to avoid an American military strike on Iran.  I can’t imagine an Obama administration authorizing a military attack.  An administration that can barely bring itself to fly air cover in Libya, and can’t bring itself to take any serious action in Syria, strikes me as very unlikely to unleash our armed forces against the mullahs.

Even as the debate approaches, remember you can fool some of the people ONLY some of the time.

Anyone want to bet how many times Obama spikes the football regarding the demise of Osama bin Laden tonight? 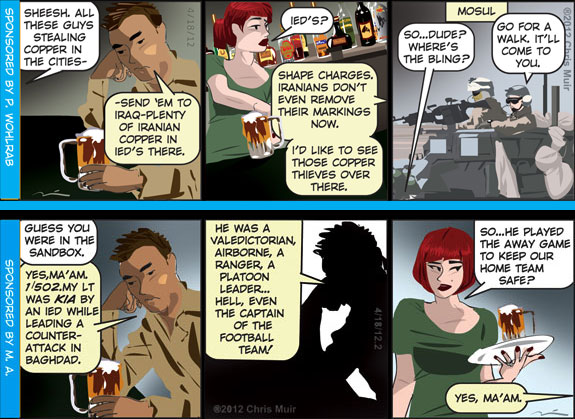 Day By Day by Chris Muir
Chris, we should NEVER forget those who sacrificed so much protecting the homeland….
Iran’s President Mahmoud Ahmadinejad today speaking in New York City at the United Nations

So, the Iranian President thinks the United States brought down the Twin Towers on 9/11.

Iranian President Mahmoud Ahmadinejad spoke to the United Nations General Assembly this afternoon, sharing some rather provocative rhetoric over the United States worst terrorist attack in history. Ahmadinejad suggested to the assembled diplomats, ambassadors and world leaders that the events that occurred on 9/11 were actually orchestrated by the U.S. Government.. This prompted the U.S. delegation to abruptly leave the assembly hall while many other national delegates followed suit.

Ahmadinejad also insists that the Iranian nuclear program is peaceful and Iran is not developing a nuclear weapon. Yet, President Obama wishes to diplomatically engage with this head of a state who is the most egregious exporter of terrorism.

Can we say that Obama is weak on Iran?

But, the State Department issued a statement anyway.

Rather than representing the aspirations and goodwill of the Iranian people, Mr. Ahmadinejad has yet again chosen to spout vile conspiracy theories and anti-Semitic slurs that are as abhorrent and delusional as they are predictable.


The political side of all this is equally plain. Obama will, by all accounts, suffer a tremendous setback in November and may well be defeated in 2012. Should Iran acquire the Bomb in the next two years — the timetable Jeffrey suggests — Republicans will have an even stronger case that Obama has weakened our national security. The Obama who had struck Iran and destroyed its nuclear program would be a far stronger candidate, and perhaps an unbeatable one. Now, from my perspective that is no reason to stop Iran’s nuclear program, but I’m a Republican. It’s inevitable that as Iran creeps closer to the Bomb and Obama creeps closer to defeat, Democrats — above all, the ones in the White House — will start wondering exactly why striking that nuclear program is such a terrible idea. They’ll start re-examining the likely Iranian reactions (they don’t really want a war with us, do they? Regime survival and all that?), the down-sides of an Israeli strike (hey, we’re the leaders of the free world, after all), the military challenge (well, the Air Force isn’t very busy, and it’s just a few sites to hit). They will of course not tell themselves this re-assessment is related to politics; they will persuade themselves they are doing what’s right for the security of our country. Watch.

Day By Day by Chris Muir
It is NO surprise that Iran has a “SECRET” underground uranium enrichment facility – one in which they can process sufficient nuclear fuel for weapons.

And, today, the Iranian Revolutionary Guard are testing short-range missiles that are capable of hitting Israel.

President Obama is at a cross-roads with Iran.

He can either insist on the enforcement of the United Nations resolutions or capitulate. His call for diplomatic engagement with Iran will only postpone the inevitable. Obama cannot punt the Iranian nuclear football down the road like George W. Bush did.