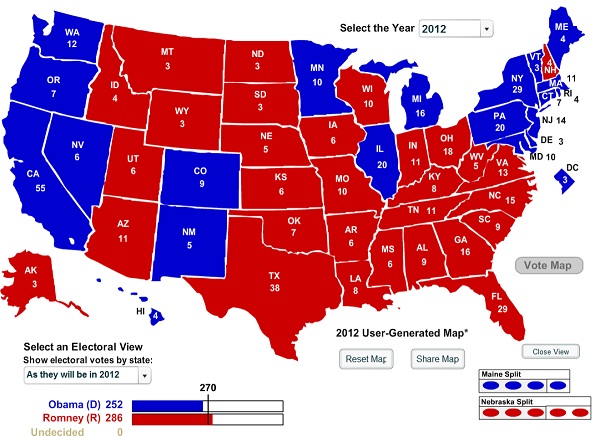 The Electoral College map above illustrates why – namely, Wisconsin and Iowa are moved to red, while Nevada moves to blue from my previous prognostication map which is below.

Mitt Romney has decided to employ an upper-Midwestern Electoral College vote strategy as opposed to a Hispanic-voter Western states Electoral College strategy. In other words, the key battleground states of Nevada and Colorado will be de-emphasized or even written off (although having just returned from Las Vegas a few days ago, the Romney campaign and Crossroads GPS television ads are omni-present and frequent).

Most political pundits agree that Paul Ryan will help Romney in Wisconsin. With the failed recall of Wisconsin Republican Governor Scott Walker, Wisconsin might be ripe for a flip from Obama to Romney (polling there shows Romney/Ryan tied with Obama). And, who better to team up with Romney than a “Wisconsin favorite son” in Paul Ryan. Iowa is right next door to Wisconsin and will also be in play.

Now, this punditry assumes that other key battleground states like Florida, Virginia, Ohio and Florida will also flip from Obama to Romney/Ryan. But, with the addition of Iowa and Wisconsin, Romney/Ryan could afford to lose Virginia and still reach the 270 Electoral College votes required for victory.

The key battleground states are taking shape – add Iowa and Wisconsin to the mix.