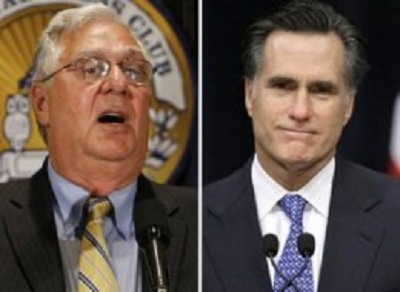 Yes, and why would it be any other way? Mitt Romney is NOT a Tea Party candidate, but a GOP establishment one.

A top goal of the nation’s most influential national Tea Party group is to stop Mitt Romney from winning the Republican nomination for president.

Interviews with top officials at FreedomWorks, a Washington-based organizing hub for Tea Party activists around the country, revealed that much of their thinking about the 2012 election revolves around derailing the former Massachusetts governor.

“Romney has a record and we don’t really like it that much,” said Adam Brandon, the group’s communications director.

FreedomWorks is led by former House Majority Leader Dick Armey (R-Texas) and Matt Kibbe, an economist and former Capitol Hill aide. More than 30 employees, as well as a fresh class of several interns, work out of spacious seventh floor offices near the U.S. Capitol. The group knows they cannot impose their will on the fiercely independent conservative organizers fueling the Tea Party. But they say the activist base is just as anti-Romney as they are.

Kibbe said in an interview that FreedomWorks has no plans at the moment to endorse an opponent of Romney’s in the primary. But others in the organization made clear they will devote considerable resources toward helping whoever emerges as the most viable Republican in the primary other than the putative front runner.

Brendan Steinhauser, who travels around the country meeting with activists as FreedomWorks’ top liaison to the grassroots, said most people he talks to are “definitely trying to stop Romney.”

The Tea Party in 2012 will have one or two choices: Minnesota Rep. Michele Bachman or former Alaska Governor Sarah Palin. Bachmann for sure is running and Palin, as of today looks like it, but may wait until the late summer to announce.