Flap is hoping for a REPRISE in a few months. Maybe the first of the year? 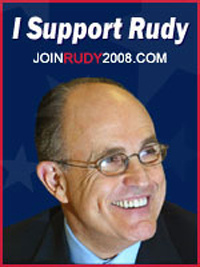 With mixed emotions I announce: John and I will no longer be producing editorial cartoons. John will continue posting his work at his blog, John Cox Art, and he and I will continue working together on various projects, but there will be no more regularly scheduled editorial cartoons. The Web site will remain running indefinitely, as a means to market our books and as an archive of our work.

Flap is sad as he has enjoyed their work.

Perhaps in the future they will resume their collaboration on political editorial cartooning.

No wonder those that are beating the war drums against Iran didnâ€™t want Iranian President Mahmoud Ahmadinejad to speak any place American might hear him. Thanks to Columbia University and CPAN he was heard by many. He sounds entirely to reasonable. Hearing his own word doesnâ€™t help the cause of demonizing him as a madman and the most recent Hitler. This is someone we definitely should be talking to. so in the interest of promoting peace and knowledge, I present these short excerpts from his talk at Columbia University today.

LGF: Daily Kos: Why I Have A Little Crush on Mahmoud Ahmadinejad

All Flap can say is WOW! These folks are WHACKED……….

Iran Watch: A Crush on Ahmadninejad?

Iran’s president: ‘We don’t have homosexuals’

Columbia University President Lee Bollinger excoriated Iranian President Mahmoud Ahmadinejad on Monday, going through a long list of documented actions and remarks by the firebrand Iranian leader and his government.

“Mr. President, you exhibit all the signs of a petty and cruel dictator,” Bollinger said to applause from many of the 600 people in the room for a speech from the Iranian leader. …

Asked about widely documented government abuse of women and homosexuals in his country, Ahmadinejad said, “We don’t have homosexuals” in Iran. “I don’t know who told you we had it,” he said.

Sharia Law says NO homosexuality and Mahmoud is the grand enforcer of Sharia Law in Iran – hence the denial.

Q: What is the problem of an Iranian homosexual?Kaveh: The first is that we cannot discuss any of our problems. We have a problem with the government due to our sexual orientation; the Islamic government does not accept us and we are condemned to hanging and stoning. In comparison the rest of the problems are minor.

Mere Rhetoric has graphic photos of how the Islamic regime treats homosexuals.

Now, does anyone understand why this Islamic terrorist dictator should NOT have been invited to spread his BS at Columbia University?

Iran Watch: A Crush on Ahmadninejad?

The above image was originally posted last October. It’s an optical illusion called an “inversion.” If you look at the upside-down version just below, you will see a caricature of Iranian President Ahmadinejad. For more about the image and why came to be, see the original post. I’m reposting it because, with Ahmadinejad speaking at Columbia University, comparisons of Ahmadinejad to Hitler are making the news.

Iranian President Mahmoud Ahmadinejad, facing protests and tabloid headlines calling him “evil” and a “madman,” stirred debate Monday about free speech ahead of his appearance at Columbia University.

Columbia President Lee Bollinger has promised to grill Ahmadinejad on subjects such as human rights, the Holocaust and Iran’s disputed nuclear program. The Iranian leader previously has called the Holocaust “a myth” and called for Israel to be “wiped off the map.”

Bollinger said Monday it was a question of free speech and academic freedom.

Ahmadinejad is to speak and answer questions at a Columbia forum Monday, followed by a scheduled address to the U.N. General Assembly on Tuesday.

Flap will love the questions from the students and academics. But, will Ahmadinejad allow them?

Ahmadinejad loves to play the Western Media cycle from afar but will he be able to withstand scrutiny of an open forum?

Stay tuned as his appearance at Columbia University begins at 1:30 PM EDT.

Charles Johnson has a list of the various protests here.

A popular comic strip that poked fun at the Rev. Jerry Falwell without incident one week ago was deemed too controversial to run over the weekend because this time it took a humorous swipe at Muslim fundamentalists.

The Washington Post and several other newspapers around the country did not run Sunday’s installment of Berkeley Breathed’s “Opus,” in which the spiritual fad-seeking character Lola Granola appears in a headscarf and explains to her boyfriend, Steve, why she wants to become a radical Islamist.

The installment did not appear in the Post’s print version, but it ran on WashingtonPost.com and Salon.com. The same will hold true for the upcoming Sept. 2 strip, which is a continuation of the plotline.

The Wahington Post and other American newspapers have NO problems with political satire on the comic pages if it involves the Christian RIGHT but are afraid when it involves Islam.

Remember the FLAP over the Muhammed Caricatures from Denmark last year?

The August 26th Opus strip about fundamental Islam is here.

The Washington Post Writers Group syndicates “Opus,” and the Post is the cartoon’s home newspaper. The syndicate sent out an alert about the two strips in question, according to Writers Group comics editor Amy Lago.

There was also considerable alarm over the strip at the highest echelons of The Washington Post Co., according to the sources.

Lago said she flagged some of the syndicate’s newspaper clients for two reasons: because of the possibility that the jokes about Islam would be misconstrued and because of the sexual innuendo in the punchline.

“The strip came in and I knew we would have to send out an alert to all the newspapers,” Lago said. “I do that fairly regularly with materials that might pose issues for local areas. … We knew that because it was a sex joke, it could raise issues. And there is another client that has issues with any Muslim depiction whatsoever.”

Is the Washington Post afraid of offending the Muslims? Or afraid of a backhanded sex joke?

The Wapo will publish America’s national security secrets without hesitation and have done so on numerous occasions.

Maybe Wapo editors are afraid the Islamic fundamentalists might burn their building down? Or kidnap and behead their reporters?

Is there any WONDER why the American newspaper industry is dying a “SLOW DEATH?”

Freedom of speech – NOT found at the Washington Post.