ZZZZZ – Harry Reid couldn’t pull the trigger and the Senate is better for it.

Progressive senators working to dramatically alter Senate rules were defeated on Thursday, with Senate Majority Leader Harry Reid (D-Nev.) and his counterpart, Minority Leader Mitch McConnell (R-Ky.), set to announce a series of compromise reforms on the Senate floor that fall far short of the demands. The language of the deal was obtained by HuffPost and can be read here and here.

The pressure from the liberal senators, led by Oregon Democrat Jeff Merkley and backed by a major coalition of progressive groups, created the political space for Reid to cut the deal with McConnell, which includes changes to how the Senate operates but leaves a fundamental feature, the silent filibuster, in place.

OK, the Dems surrendered because the prudent ones know that what goes around, comes around.

Most Americans would agree to send all of the members of Congress packing, if they did not vote for a budget.

Why should Senate Majority Leader Harry Reid, who is protecting Democratic Senators, up for 2014 re-electon in Red States get a pass.

Dingy Harry: Pass a budget and let’s have a discussion with the House to regain fiscal sanity. 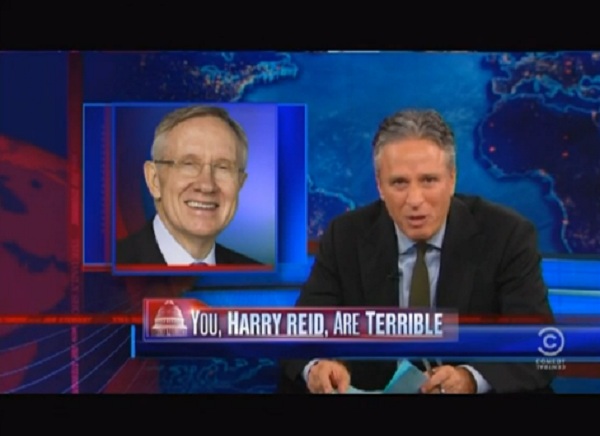 Work on this air traffic control tower under construction has been
stopped Tuesday, July 26, 2011, at the Oakland International Airport in
Oakland, Calif. Since a partial shutdown of the FAA took effect Friday,
the agency has furloughed nearly 4,000 workers, stopped the processing
of about $2.5 billion in airport construction grants, and issued stop
work orders to construction and other contractors on more than 150
projects, from airport towers to runway safety lights

The Senate will pass the House’s bill to fund the Federal Aviation Administration through September to end the week-and-a-half-long partial shutdown of the agency, Senate Majority Leader Harry Reid (D-Nev.) announced Thursday.

Under a deal Reid made with House Speaker John Boehner (R-Ohio), the Senate will pass the House bill that includes cuts to rural flight service to airports in Nevada, West Virginia and Montana. But Transportation Secretary Ray LaHood will use his authority to waive the airports from the cuts, ending a 13-day impasse that left 4,000 FAA employees and about 70,000 construction employees out of work.

Reid said the deal did not solve the issues that led to the partial shutdown of the FAA, but he said those can be dealt with another day.

“I am pleased to announce that we have been able to broker a bipartisan compromise between the House and the Senate to put 74,000 transportation and construction workers back to work,” Reid said in a statement released by his office. “This agreement does not resolve the important differences that still remain. But I believe we should keep Americans working while Congress settles its differences, and this agreement will do exactly that.”

But, the White House was obstinate, President Obama was playing around giving birthday fundraising speeches in Chicago and folks realized they were not working because of what the White House wanted. Hence, the Obama Administration got caught with their pro-labor ideology exposed again.

The House and Senate passed a 20th short-term extension of FAA funding in May when the chambers both passed versions of the longer-term bills that were drastically different. The House version included provisions that would undo changes to labor rules that were adopted by the National Mediation Board to make it easier for railroad and airline workers to unionize.

The chambers passed an extension through July 22 when President Obama issued a veto threat of the larger bill.

But as July 22 approached, House leaders added a provision to what would have been a 21st extension that cut subsidies for rural flight service to airports in Nevada, West Virginia and Montana. Noting the airports were in the districts of the Senate Majority Leader Reid, Senate Commerce, Science and Transportation Committee Chairman Sen. Jay Rockefeller (D-W. Va.) and Senate Finance Committee Chairman Sen. Max Baucus (D-Mont.), Democrats accused Republicans of retaliating politically for the Senate’s objection to the labor provision.

The partial shutdown of the FAA, which last thirteen days, was estimated to have cost the federal government $30 million per day because the agency was not authorized to collect taxes that would normally be paid on airline ticket sales.

Transportation observers estimate the shutdown has also placed about 70,000 construction workers out of work because about 200 airport construction projects have been placed on hold.

Work on this air traffic control tower under construction has been stopped Tuesday, July 26, 2011, at the Oakland International Airport in Oakland, Calif. Since a partial shutdown of the FAA took effect Friday, the agency has furloughed nearly 4,000 workers, stopped the processing of about $2.5 billion in airport construction grants, and issued stop work orders to construction and other contractors on more than 150 projects, from airport towers to runway safety lights

Talk about a party of NO.


The Federal Aviation Administration has been in a partial shutdown mode since July 22. And Senate Majority Leader Harry Reid says the shutdown will continue, with some 4,000 federal workers remaining on furlough.

“It’ll be closed until… maybe not September, maybe more than that,” he tells All Things Considered co-host Michele Norris.

The FAA shutdown continues despite the end of weeks of debate over raising the federal debt ceiling — the House approved that legislation Monday, and the Senate followed suit Tuesday. President Obama signed the bill Tuesday afternoon.

An AP story reports that the “Senate continues to object to legislation approved by the House to fully fund the FAA. The bill includes cuts to certain subsidies for rural air service.”

But Reid says the problem actually lies with one airline: Delta.

The issue, Reid says, is Delta’s “non-union” stance. The bill to fund the FAA, as crafted by House Republicans, includes language that sets new rules for aviation workers’ votes on labor representation.

And, what was Dingy Harry Reid and the Democrats talking about?

Jobs….. but, I guess their way or the highway and not the skies.