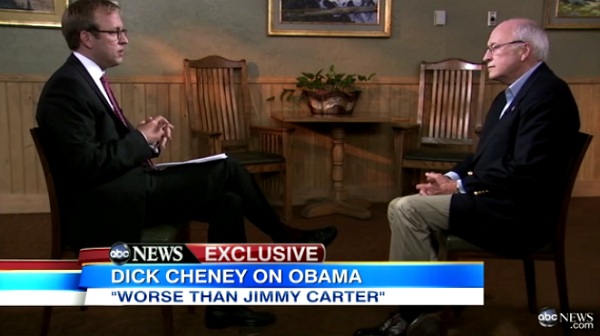 Dick Cheney is certainly back in the political arena.

Former Vice President Dick Cheney, in his first interview since a heart transplant operation in March, blasted President Obama calling him “one of our weakest presidents.”

“Obviously, I’m not a big fan of President Obama,” said Cheney in an excerpt from an interview with ABC News aired Monday on “Good Morning America.” “I think he’s been one of our weakest presidents.  I fundamentally disagree with him philosophically, be hard put to find any Democratic president I disagree with more.”

Asked by ABC’s Jonathan Karl if Obama was “worse than Jimmy Carter in your perspective,” Cheney responded “yes.”

I don’t know about worse than Carter.

At least President Obama has had some foreign policy success with the killing of Bin Laden. But, the economy has been extremely poor and he will have to justify his policy decisions in the November election.

Here is the Cheney interview in an embedded video below:

Both are failed Presidents and ONE TERM.

Chris illizza over at the Washington Post looks at key battleground states for the Presidential race of 2012 and gives the data. You know the question in one of the Presidential debates to President Obama will be (like GOP challenger Ronald Reagan asked President Jimmy Carter in 1980): “Are you better off than you were four years ago?”

Well, with the regards to unemployment the news is not good for President Obama.


And that raw political reality could put President Obama in a difficult spot as he prepares to seek another four years in the White House amid conflicting signs about the relative health of the economy.

The increases range from the tiny — just a 0.7-point jump in Minnesota and New Hampshire — to the titanic in places like Nevada (up 4.4 points) and Florida (up 3.6).

And, Obama’s only response will be: “You should have seen how bad it would have been.”

I don’t know if this is going to wash in Nevada and Florida.

But, on the other hand of these 14 swing states that Cillizza mentions only 4 have May unemployment above the national average. But, you know that is spin and unemployment generally is worse since President Obama has been in office.

President Reagan beat Jimmy Carter on the answer to the “better off” question. He won re-election because while unemployment was high, it was improving.


That “trend line” vote is why the late President Ronald Reagan won a second term overwhelmingly in 1984 despite the fact that the unemployment rate was at 7.3 percent in October of the election year. (It had been at 10.3 percent as recently as March 1983.)

The best way for Obama to counteract the “are you better off” question is to have evidence to point to that things are turning around — that whether or not you believe the country was on the brink of an economic catastrophe you see signs that your financial situation is improving and have reason to hope the future will be brighter.

The latest Washington Post/ABC News poll suggests he’s not there yet.

No, President Obama is not there yet and unless the economy improves very quickly, he will go the way of Jimmy Carter.

If the Misery index of unemployment and inflation is the harbinger of election 2012, Barack Obama will NOT be re-elected.


When it comes to measuring the combination of unemployment and inflation, it doesn’t get much more miserable than this.

In fact, misery, as measured in the unofficial Misery Index that simply totals the unemployment and inflation rates, is at a 28-year high, reflective of how weak the economic recovery has been and how far there is to go.

The index, first compiled during the soaring inflation days of the 1970s by economist Arthur Okun, is registering a nausea-inducing 12.7—9.1 percent for unemployment and 3.6 percent for annualized inflation—a number not seen since 1983. The index has been above 10 since November 2009 and had been under double-digits from June 1993 through May 2008.

But, President Reagan in the 1980’s had a plan to wring the misery out of the economy (created by President Jimmy Carter’s economic policies) – cuts in government spending, tax reform and tax cuts. Plus, Paul Volcker’s tight money policy at the Fed helped control inflation. I remember the high inflationary price pressures, high gold prices and rampant real estate speculation – plus, the gasoline lines under Carter.

Reagan won the election in 1980 with his plan to right the economy.

Without these policy changes and a dramatic improvement of the economy, Reagan would NOT have been re-elected in 1984.

President Obama knows what has worked in the past. He simply doesn’t believe these measures will work because of his political ideology of tax and redistribution of wealth.

No real surprise here, especially with the fall of Jimmy Carter who should be at the bottom anyway.


Of the nine U.S. presidents who have served in the past 50 years, John F. Kennedy continues to earn the highest retrospective job approval rating from Americans, now 85%. Ronald Reagan ranks second, with 74%. While these presidents’ ratings are largely unchanged from 2006, Bill Clinton’s rating has improved, putting him in third place, while Jimmy Carter, at 52%, has dropped from third to sixth. Richard Nixon remains the lowest rated.

I disagree where W is in relation to Carter and LBJ. Those two Democrats were downright horrible. History will judge the second Bush better over time.

But, in all likelyhood a Value Added Tax (VAT) to pay for ObamaCare and other government stimulus spending is the reality here.

Obama and the Congressional Democrats have turned the economy into a Jimmy Carter slow growth, high unemployment malaise. They have NO real solutions because of the debt they have created or will create with ObamaCare.

Obviously, “spreading the wealth around” which Obama instructed Joe the Plumber has been a failure. But, then again, it had failed before in America, Europe and the Soviet Union.