Sarah Palin and American voters care wit not what Ed Rollins, now a CNN media pundit has to say. Rollins who ran Ronald Reagan’s re-election campaign in 1984 and who lately ran Mike Huckabee’s 2008 failed Presidential campaign is flailing about as usual. He really does not have to remind us about Reagan’s past and his legacy.

Sarah Palin is NOT Ronald Reagan.

Does Sarah Palin hold the same or very similar views on the role of government?

I remind Ed Rollins and other “establishment” Republican types is that the 2012 Presidential nomination will be decided the old fashion way – by voting in elections. Everything else by the pundits, like Rollins, is nothing but HOT AIR.

Here is John McCain on Sarah Palin and Reagan:

If anyone thinks now that John McCain has beat back a challenge by a Republican challenger in an Arizona GOP Primary election is not for illegal immigrant amnesty, I think they have another thing coming.

Watch the video above and see the REAL John McCain.

Think McCain will vote to filibuster the Dream Act when Harry Reid brings it to the Senate next week?

I think the next group of GOP Senators that will be targeted by Tea Party activists for GOP Primary defeats will be those who support the Dream Act.

JD Hayworth filmed this infomercial in November 2007 for a company called National Grants Conferences – widely regarded as a fraud and a scam.

And, calls McCain the L-word: LIBERAL.

“Senator McCain has served this country admirably but it’s time to replace his moderate or even liberal positions on taxes, the border, social causes and big bank bailouts with a consistent conservative like J.D.,” Arpaio writes in the letter. “”I just wish Senator McCain had run as hard against Barack Obama as he is against a conservative like J.D. That could have prevented the harmful, liberal agenda we are all now suffering through.”

“Indeed, Senator McCain is already attacking J.D. by name in advertisements because [McCain] knows [Hayworth] is the type of exciting, principled conservative that excites people like you and me,” Arpaio adds. “And he knows that after years of running over Republican principles his entire career no election year conversion to our way of thinking will save his campaign from voters that want conservatives to be a part of the solution rather than part of the problem.”

This endorsement won’t make any difference this time around since McCain, unless he has health problems, should sail to easy re-election. Sarah Palin will give McCain cover from the right. But, in six years….. 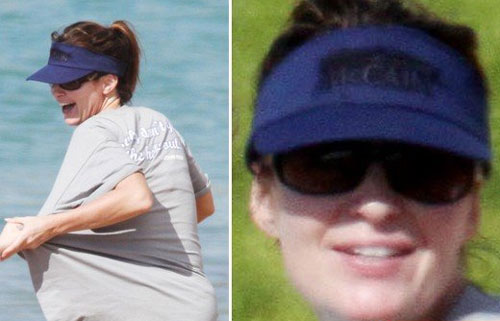 This whole flap is pretty silly really but former Governor Palin issued a response to the story on TMZ.

Declaring that she â€œwas honored and proud to run with him,â€ former Alaska governor Sarah Palin pushed back hard Wednesday against a report that she had disrespected Sen. John McCain (R-Ariz.) by blacking out his name on a sun visor she wore on vacation.

The website TMZ accused Palin of â€œa frontal attack on Sen. John McCainâ€ during a Hawaii vacation this week: â€œSarah chose to wear a visor from her campaign â€” a visor that was emblazoned with the former presidential candidate’s name … that is, until Palin redacted McCain’s name with a black marker.â€

But Palin said in a statement to POLITICO that she was just trying to â€œbe incognitoâ€ â€” to go unrecognized and shield her children and husband, Todd, from paparazzi.

The hotel where she was staying had to chase away five photographers, a friend said.

Palin said in the statement to POLITICO: â€œI am so sorry if people took this silly incident the wrong way. I adore John McCain, support him 100 percent and will do everything I can to support his reelection. As everyone knows, I was honored and proud to run with him. And Todd and I were with him in D.C. just a week ago. So much for trying to be incognito.”

Well, the press is always trying to make a story and these stories sell. But, it is noteworthy tht Sarah Palin pushed back so hard and so quickly.

The endorsements are not really a surprise since I had this fundraising invitation last week. But, it does make the support offiicial.

â€œI am humbled to have earned the endorsement of each one of these distinguished Republican Senators. They are all dedicated public servants and it is a true honor to have their support. I look forward to working with each of these Senators to get our economy moving again and to restore fiscal accountability to Washington,â€ said Fiorina. â€œCalifornia is not getting the kind of representation it deserves in the United States Senate. In nearly 18 years, Barbara Boxer has only managed to get a handful of inconsequential bills signed into law and I donâ€™t believe that is good enough for California. Itâ€™s time for a change.â€

What is most interesting to me is that Fiorina is being supported by a broad base within the Republican Party. There are liberal Republican, moderate Republican and conservative Republican Senators from the East Coast to the Far West who are endorsing Carly and most importantly will help her raise money for her campaign.

Each Senator issued the following:

And, three of the four Republican women Senators have quickly endorsed Fiorina.

The fundraising potenital of all of these Senators will translate into millions of dollars for campaign ads to use in the GOP contested primary election against Chuck DeVore and later in the general election.