A little too little and way too late.

Missouri Senate candidate Todd Akin has recorded a television ad asking for “forgiveness” from the voters of his state and acknowledging that he used “the wrong words in the wrong way” when he suggested last weekend that rape rarely leads to pregnancy.

The Republican congressman has come under heavy fire from national Republicans for his comments and has been urged by some to drop his candidacy before the no-penalty withdrawal deadline of 5 p.m. today. Akin has said he will move ahead with his bid against Democratic Sen. Claire McCaskill and the spot is an indication that he plans to follow through.

The commercial, which was shared with POLITICO, shows Akin speaking directly to the camera and explaining that he has compassion for the victims of rape.

“Rape is an evil act. I used the wrong words in the wrong way and for that I apologize. As the father of two daughters, I want tough justice for predators. I have a compassionate heart for the victims of sexual assault. I pray for them,” Akin says. “The fact is, rape can lead to pregnancy. The truth is, rape has many victims.”

Akin continues: “The mistake I made was in the words I said, not in the heart I hold. I ask for your forgiveness.”

Rep. Todd Akins should withdraw and I doubt he will be in the Missouri Senate race by the close of business today. 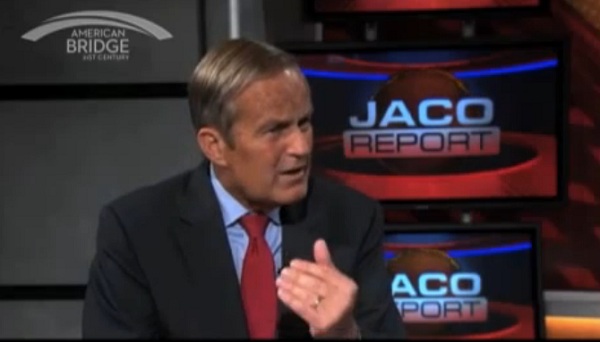 The whole Todd Akin and “legitimate rape” flap has blown up -as it should. It is time for Rep. Todd Akin to immediately step aside from his U.S. Senate nomination by the Republican Party.

Representative Todd Akin, the Republican nominee for Senator from Missouri, became nationally notorious yesterday for saying something stupid. In the course of explaining why he believes abortion should be illegal even when pregnancies result from rape, he said that in cases of “legitimate rape” the victim’s body has defense mechanisms that usually prevent pregnancy.

Give the man points for concision, at least: His remarks combined several mistakes with brutal efficiency. There is no evidence for Akin’s biological claim. The frequency with which rape results in pregnancy has no bearing on whether abortion should be allowed when it does. And while it is not completely clear what point Akin was trying to make with the phrase, “legitimate rape” should not appear in any good one.

Todd Akin is a weak candidate and Senator Claire McCaskill deserves a strong opponent. While the U.S. Senate partisan control is important, it is more important that the Missouri Republican Party not be represented by some “nut job” like Akin.

It is time for Akin to step aside and if he does not do so voluntarily, the Missouri Republican Party should strip him of the nomination.

Here are his original comments in the video below:


Claire McCaskill’s approval rating has slipped a hair since PPP last polled Missouri in May, but she retains similarly slim leads over her two most likely opponents for a second Senate term, and both are still pretty unknown to voters.

43% approve of McCaskill’s work in Washington, down from 46% four months ago. The same 47% disapprove. Among the 87 senators on which PPP has polled, only one of the 23 Democrats on the ballot next year has a worse standing—Nebraska’s Ben Nelson.

McCaskill benefits from the anonymity of these Republicans vying for the nomination. Three-quarters have no opinion of Brunner, and over half are not familiar with the other two. None of them is seen positively by voters either. Steelman is best off, with 23% seeing her favorably and 25% unfavorably, followed by Akin’s 18-26 and Brunner’s 7-19.

Senator Claire McCaskill is in trouble. American Crossroads (Karl Rove’s Super PAC) is already hitting her hard with ads and a website.

How about this billboard:

The Republican Party should pick up this seat in 2012.

Missouri Senator Clair McCaskill is vulnerable in 2012 and the GOP is counting on picking up her seat. The latest PPP Poll does nothing to give her campaign any optimism.

These margins don’t exactly look comfortable for McCaskill and a look inside the numbers suggests they’re likely to get worse. There are a good deal more undecided Republicans than Democrats in all of these match ups- 5% more undecided GOP voters against Steelman, 6% more against Akin, 10% more against Luetkemeyer, 11% more against Brunner, and 12% more against Martin. If those folks end up coming ‘home’ you’re looking at each of the Republican picking up another 2-4 points on the margin.

The state of this race remains the same- McCaskill is one of the most vulnerable incumbents up for reelection next year. But the bad news cycles she endured over the last few months seemed like they had the potential to shift this race to one where she was favored to lose. In that sense the continued toss up status of the contest is good news for her.

I suppopse she could be behind but with her airplane woes and the lack of GOP hit ads means that worst is yet to come.

This race will NOT be a toss-up but a GOP gain. 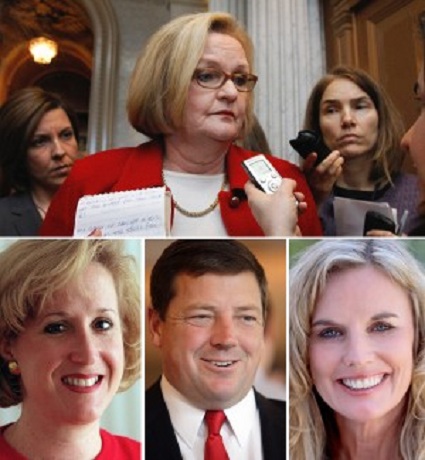 According to the lastest PPP Poll.


Sarah Steelman is the early top choice of Missouri Republicans to be their candidate for the Senate next year, although with most of the candidates including herself largely unknown at this point there is plenty of time for that to change.

Without GOP Rep. Todd Akin in the race:

But, most Missouri voters don’t really know about these candidates, so take these numbers with a grain of salt.


We’re not seeing any big ideological fissures yet in these numbers. Steelman leads Akin by 14 points with moderates but she also has a 13 point advantage with those voters describing themselves as ‘very conservative.’ Her lead is narrower with ‘somewhat conservative’ voters who give her only a one point edge on Akin. It’s a similar story when Akin’s out- then Steelman’s up 26 points on Martin with the ‘very conservative’ wing and 24 points with the moderates, but only 9 points with folks who call themselves ‘somewhat conservative.’ For whatever reason she’s doing better with moderates and the far right than the center right.

It’s too early to make a whole lot of these numbers though given that 56% of voters don’t know enough about Steelman to have formed an opinion and that just rises to 61% for Akin, 75% for Martin, and 81% for Wagner.

The full poll is here (PDF).