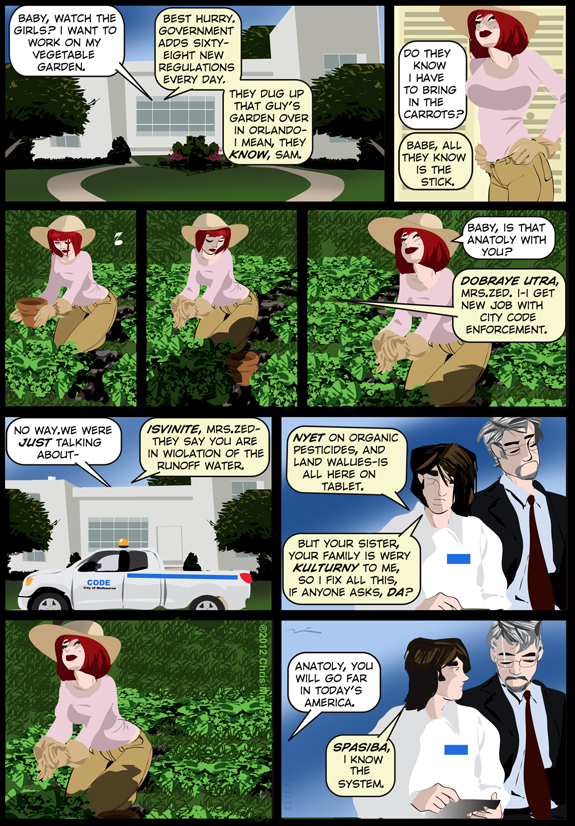 “The nine most terrifying words in the English language are: ‘I’m from the government and I’m here to help.'”

Good that Anatoly has a job, but…. 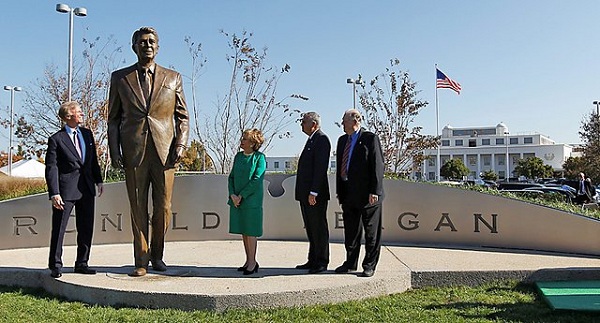 From left: Frederick Ryan Jr., chairman of the Board of Trustees of the Ronald Reagan Presidential Foundation; former Transportation Secretary Elizabeth Dole; Transportation Secretary Ray LaHood and Charles Snelling, chairman of the Board of the Metropolitan Washington Airports Authority, unveil the statue of President Reagan, on Nov. 1, 2011, at Washington’s Ronald Reagan National Airport.

The $900,000 statue is the last of four privately funded centennial statues endorsed by the Ronald Reagan Presidential Foundation.

Chris illizza over at the Washington Post looks at key battleground states for the Presidential race of 2012 and gives the data. You know the question in one of the Presidential debates to President Obama will be (like GOP challenger Ronald Reagan asked President Jimmy Carter in 1980): “Are you better off than you were four years ago?”

Well, with the regards to unemployment the news is not good for President Obama.


And that raw political reality could put President Obama in a difficult spot as he prepares to seek another four years in the White House amid conflicting signs about the relative health of the economy.

The increases range from the tiny — just a 0.7-point jump in Minnesota and New Hampshire — to the titanic in places like Nevada (up 4.4 points) and Florida (up 3.6).

And, Obama’s only response will be: “You should have seen how bad it would have been.”

I don’t know if this is going to wash in Nevada and Florida.

But, on the other hand of these 14 swing states that Cillizza mentions only 4 have May unemployment above the national average. But, you know that is spin and unemployment generally is worse since President Obama has been in office.

President Reagan beat Jimmy Carter on the answer to the “better off” question. He won re-election because while unemployment was high, it was improving.


That “trend line” vote is why the late President Ronald Reagan won a second term overwhelmingly in 1984 despite the fact that the unemployment rate was at 7.3 percent in October of the election year. (It had been at 10.3 percent as recently as March 1983.)

The best way for Obama to counteract the “are you better off” question is to have evidence to point to that things are turning around — that whether or not you believe the country was on the brink of an economic catastrophe you see signs that your financial situation is improving and have reason to hope the future will be brighter.

The latest Washington Post/ABC News poll suggests he’s not there yet.

No, President Obama is not there yet and unless the economy improves very quickly, he will go the way of Jimmy Carter.

From the 1961 Operation Coffee Cup Campaign against Socialized Medicine as proposed by the Democrats, then a private citizen Ronald Reagan Speaks out against socialized medicine. There is no video because this was an LP sent out by the American Medical Association

Damn, do I miss Ronald Reagan.

I remember him every day as I drive by his Presidenital Library.

Listen to all of the audio.

From the Press Release:

Gallegly authored the bill that created the commission and is the second person assigned to the 11-member commission. Secretary of Interior Ken Salazar was named to the commission in the bill.

â€œElton Gallegly was instrumental to the creation of this commission and itâ€™s terrific that heâ€™ll be actively involved in the celebration of Ronald Reaganâ€™s centennial,â€ said Frederick J. Ryan, Jr., Chairman of the Board of Trustees of the Ronald Reagan Presidential Foundation.

The 11-member Ronald Reagan Centennial Commission Act will plan and carry out activities deemed fitting to honor Ronald Reagan on his 100th birthday, which falls on Feb. 6, 2011.

â€œI appreciate Leader Boehnerâ€™s appointment,â€ Gallegly said. â€œI look forward to working with my fellow commissioners to create appropriate activities to honor President Reagan and to celebrate his life and accomplishments on behalf of the country he loved.â€

The commission will make recommendations and provide necessary assistance for federal, state and local governmental agencies and civic groups to honor President Reagan. Such activities could include special stamps or coins. In addition, the commission will recommend to Congress activities to honor his 100th birthday, including the possible convening of a Joint Session of Congress.

No federal money can be spent on the commission or its activities.

Galleglyâ€™s bill attracted wide bipartisan support. The Senate passed the bill by unanimous consent on May 20 and the House passed it on a 371-19 vote on March 9. President Obama signed Galleglyâ€™s bill during a June 2 White House ceremony attended by Gallegly and former First Lady Nancy Reagan.

I am looking forward to next year’s event at the Reagan Library. A gathering of conservatives, young and old, the world has probably never seen before.

The same old song is like what President Ronald Reagan proclaimed: ” The nine most terrifying words in the English language are, ‘I’m from the government and I’m here to help.’

Or, how about his one: “Politics is supposed to be the second oldest profession. I have come to realize that it bears a very close resemblance to the first.”

Governor Sanford of South Carolina  is a disgrace and should resign.

President Barack Obama is directing America in the wrong direction and should be defeated at the polls along with his cohorts in the Democratic Party controlled Congress.