Day By Day by Chris Muir
I see MSLSD (MSNBC) is now hawking the HBO Film, “Game Change” which trashes Sarah Palin. Steve Schmidt has a prime starring role in the film.

Let me say, that political consultants have driven the “interview” for the Presidency into one of the nastiest, profane professions. The race for 2012 is no longer convincing Americans to vote for you, but rather trashing all of your opponents to the most extreme degree.

I won’t be enjoying “Game Change.”

Will it be enough in Florida?

Probably not, but Gingrich will go forward with a hard earned second place and will take his campaign to other states. When Santorum and/or Ron Paul drop out, he will hope a one on one contest with Romney will help him win sufficient delegates to at least tie up the nomination (deny Mitt Romney a delegate majority) until the convention.

Perhaps, according to the latest Rasmussen Poll.

The race for the Republican presidential nomination is now nearly even with Mitt Romney still on top but Newt Gingrich just three points apart.

The latest Rasmussen Reports national telephone survey of Likely Republican Primary Voters nationwide shows Romney with 30% support and Gingrich with 27% of the vote. Former U.S. Senator Rick Santorum, who was running second two weeks ago, has now dropped to 15%.

Texas Congressman Ron Paul captures 13% support from likely primary voters, and Texas Governor Rick Perry remains in last place with four percent (4%). Another four percent (4%) like some other candidate in the race, and seven percent (7%) are undecided.

But, the big story here is Gingrich’s resurgence and Santorum’s seeming collapse. This poll was taken Tuesday night after the last South Carolina debate in which Gingrich was the CLEAR winner.

Is there enough time for Gingrich to surge in South Carolina?

But the story in the new numbers, taken Tuesday night, is Gingrich’s jump 11 points from 16% two weeks ago. Romney’s support is essentially unchanged from 29% at that time, while Santorum is down six points from 21%. Paul’s and Perry’s support is also unchanged. Former Utah Governor Jon Huntsman earned four percent (4%) of the vote at the start of the month but dropped out of the race this week. This suggests that many voters are still looking for an alternative to Romney and currently see Gingrich as that candidate. 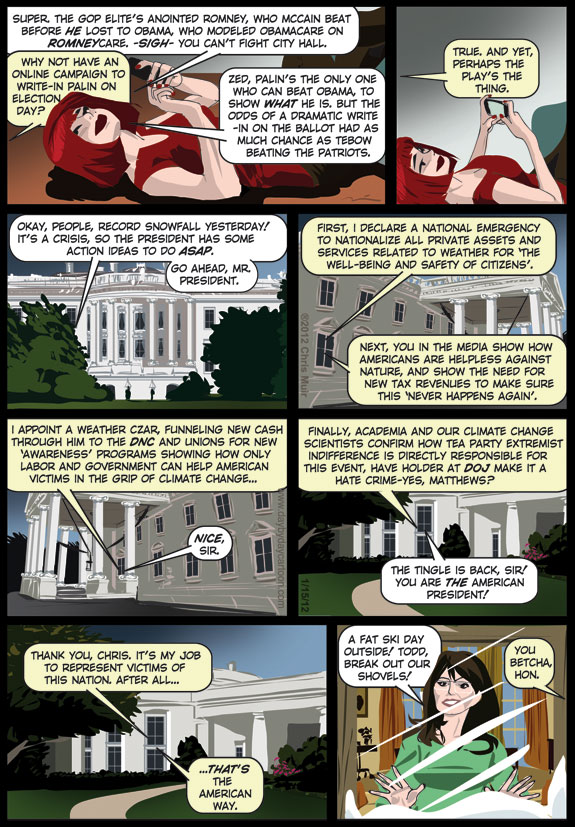 Day By Day by Chris Muir
Chris, I cannot guarantee that Romney’s approach to a “snow” crisis will be that much different than Obama’s.

Unfortunately, it looks like Mitt Romney WILL be the GOP Presidential nominee and Sarah Palin will NOT be a player in 2012.

Palins time will come in 2013 as she gears up to run for Alaska U.S. Senate or is appointed to a cabinet position (Secretary of Energy) in a Romney Administration.

Day By Day by Chris Muir
Chris, unfortunately, it is Mitt Romney’s nomination to lose at this point.