According to the latest ARG Poll. 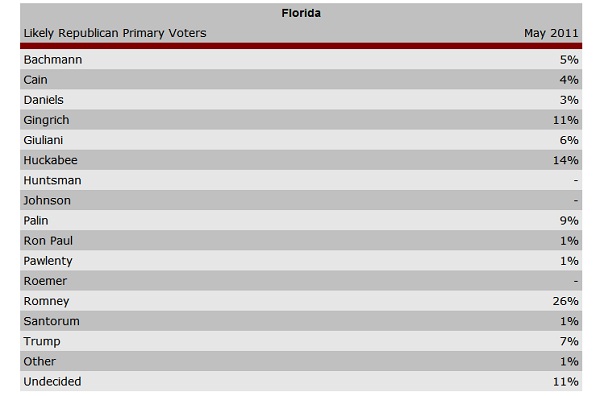 This is the third poll in less than a month that has been especially favorable for Mitt Romney. Here is the other poll.

With Romney having a virtual lock on New Hampshire and Nevada, and him polling well in Pennsylvania and Arizona is Romney setting himslef up as the front runner?

And, what affect will this Florida polling have on a possible Mitch Daniels or even Mike Hucakbee’s candidacy?

A good day for Mitt Romney.

According to the latest PPP Polls.

Even though President Obama released his long form birth certificate today and Donald Trump claimed some victory so to speak, the Donald does not poll well with Republican or independent voters.

Republicans don’t really like him that much. In New Hampshire his favorability with them is 46/40, in Iowa it’s 41/40, in North Carolina it’s 45/42, and in Nevada it’s 51/37. He’s doing well in primary polls because the GOP voters who do like him are pretty inclined to name him as their top Presidential choice. That’s different from say a Mike Huckabee or Mitt Romney who are mostly well liked even by Republicans for whom they are not the first choice for the nomination. With Trump there is not as much of that middle ground- you either want him as the nominee or you dislike him. Those kinds of numbers will maybe give you a long shot chance at the nomination but they don’t make you a viable contender in November.

Trump is completely toxic to independent voters. His favorability with them in Nevada is 35/57, in Iowa it’s 29/58, in New Hampshire it’s 23/63, and in North Carolina it’s 28/61. His recent antics have ingratiated him to a meaningful chunk of the far right Republican base, but he’s completely turned off the folks in the center whose votes often determine who comes out on top in Presidential contests.

So, it has been a fun show Donald for a few weeks, but it is time to say good bye. With these numbers, Trump will NOT be a candidate for President.

PPP polling seems to think that the President is holding his own in North Carolina. But, in this point in the race for 2012, Obama is not looking particularly strong in a key battleground state that the GOP nominee must win.

Barack Obama’s poll numbers nationwide aren’t looking very good right now but one place where he’s holding up pretty well is North Carolina. His approval rating there this month is 49%, with 48% of voters disapproving. Those numbers basically mirror the results of the 2008 election in the state, pretty good given that in our national polling right now his approval spread is running 13 points behind his margin of victory against John McCain.

There are two data points key to Obama’s continued decent standing in North Carolina. In most places Obama has maintained his popularity with minorities but seen a significant decline in his popularity with white voters. Here though his 37% approval rating with whites matches the percentage of the vote we found him winning in 2008 and that combined with his 87% standing with black voters puts him on slightly positive ground overall. The other key thing for Obama is that he’s at 50/44 with independents here, basically matching his 2008 victory margin over McCain in the state with those voters and running counter to his 37/54 approval breakdown with them nationally.

Mike Huckabee and Mitt Romney are both withn the margin of error (4.4%) in the polls with an uncumbent President. Huckabee has NOT even made overtures to run for the office. This isn’t saying much about Obama’s strength.

The PPP polling folks, a Democratic pollster, are having some delusions of grandeur here. Obama is in trouble.


More than 6 in 10 registered voters nationwide say they would definitely not vote for Donald Trump or Sarah Palin for president in 2012, significantly more than say the same about possible Republican candidates Mitt Romney or Mike Huckabee, or about President Barack Obama.

This is not really surprising but I doubt it means much. I doubt Sarah Palin or Donald Trump will be candidates for the GOP nomination for President.

What is most interesting to me is that 46% of Americans polled say they will NOT vote for President Obama which is about the same for Mike Huckabee and Mitt Romney.

While the Donald Trump show has been amuzing the past few weeks, it has served as an outlet for Americans who have decided that they do not wish to re-elect President Obama. There are sufficient Republican canddates in Huckabee and Romney who can make a credible run against the President. I, also believe, there will be other candidates who will emerge within the next 30-60 days who have accomplished records that can also be viewed as viable candidates, including Tim Pawlenty, Mitch Daniels, Chris Christie and Paul Ryan.


Trump’s attention-grabbing, high-visibility statements and his ability to generate large amounts of news coverage cut two ways. On the one hand, Trump has undeniably dominated news coverage of the Republican race in the last several weeks, vaulting him into the middle of political and election news discussion and coverage. On the other hand, Trump’s ability to generate publicity apparently has its costs, as his image has turned more negative and as more than 6 in 10 voters across the country already say they would definitely not vote for him.

Trump also faces apparent obstacles in his efforts to gain the Republican nomination, should he decide to run. Almost half of Republican registered voters at this point say they would definitely not vote for him, the highest of any of the four possible GOP candidates measured in this survey.

As the GOP field narrows in the next 30 days, we will see how the numbers start to move. As Karl Rove said yesterday, a GOP candidate cannot wait more than another 30-60 days to begin raising sufficient money to run their campaign. And, major GOP donors are waiting on the sidelines, waiting for the field to firm up.

I agree with Dick and disagree as well.

Indiana Governor Mitch Daniels should he decide to run (watch his D.C. speech next week, May 4th at the American Enterprise Institute), will give Mitt Romney fits in the right of center and moderate wing of the GOP. Most of the big GOP donors will pull any of their money away from a late-starting race of Mike Huckabee.

The race will be between Daniels, Huckabee and Romney.

If Daniels runs Donald Trump will not be a factor in the race. If he does not, look for Huckabee to jump in with the Tea Party and battle Trump and Romney.

Everyone else at this point, including Sarah Palin, is noise.

With regards to President Obama, the economy has not dramatically improved and unless gasoline prices drop precipitously, he is looking like a failed, one term President.