Gee, Chris, Zed has two more than the President.


New York Gov. David Paterson (D) will meet with the imam and developer of the proposed mosque near Ground Zero “later this week” to discuss the possibility of removing the mosque to an “alternate location”, according to Rep. Peter King (R).

King, an outspoken opponent of placing the mosque and Islamic cultural center so close to where terrorists attacked on Sept. 11, 2001, learned about the meeting during a phone call with Paterson Tuesday morning.

A spokesman for Paterson confirmed that efforts to broker a solution are underway. “We are working with the developers on a staff level but there have not been any formal discussions between the governor and Imam or developer,” said spokesman Morgan Hook. “However, we expect to have a meeting scheduled in the near future.”

Kind of ironic that David Paterson may be bailing out the President when Obama originally tried to force him out of a re-election race. But, Paterson is now out and Obama has some appointments at his disposal.

Pretty standard but you would never see Rudy Giuliani involved in such machinations, now would you?

Well, Paterson has a point.

Obama’s policies have not exactly been stellar and he has been cratering in the polls too.

Now, what we need is Rudy to chime in……. 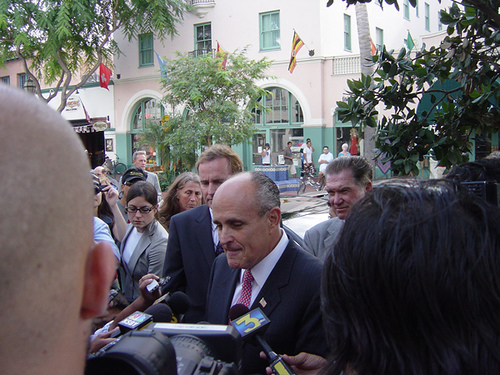 Makes one wonder if Obama’s political shop has collapsed.


Gov. David A. Paterson defiantly vowed to run for election next year despite the White Houseâ€˜s urging that he withdraw from the New York governorâ€™s race.

Appearing tired and agitated at a parade in Harlem on Sunday, the governor told a crowd of reporters that he would not abandon his campaign to seek a full term.

â€œI have said time and time again that I am running for governor next year,â€ he said at the 40th annual African-American Day Parade.

Mr. Paterson would not characterize what he was told by the White House, saying that he would not â€œdiscuss confidential conversations.â€

â€œIâ€™m not talking about any specific conversations,â€ he said. â€œAs I said, I am running for office.â€

President Obama had sent a request to Mr. Paterson that he withdraw from the New York governorâ€™s race, fearing that Mr. Paterson cannot recover from his dismal political standing, according to two senior administration officials and a New York Democratic operative with direct knowledge of the situation.

The decision to ask Mr. Paterson to step aside was proposed by political advisers to Mr. Obama, but approved by the president himself, one of the administration officials said.

â€œIs there concern about the situation in New York? Absolutely,â€ the second administration official said Saturday evening. â€œHas that concern been conveyed to the governor? Yes.â€

The administration officials and the Democratic operative spoke on condition of anonymity because the discussions with the governor were intended to be confidential.

The presidentâ€™s request was conveyed to the Mr. Paterson by Representative Gregory W. Meeks, a Queens Democrat, who has developed a strong relationship with the Obama administration, they said.

Obama, Rahm and Axelrod know that Paterson will not beat former New York City Mayor Rudy Giuliani. But, they have fumbled the delicate balance of forcing out Paterson and giving him a face saving prize to clear the field for Attorney General Andrew Cuomo.

Maybe it was the resentment of the Caroline Kennedy – Hillary Clinton mess.

But, Paterson is so far down in the polls Rudy Giuliani will be an easy winner and the New York GOP WILL make a come back.


Nineteen months after ending his disastrous run for the presidency, Rudolph W. Giuliani is clearing a path for a possible race for governor in 2010, believing public anger at an ineffectual Albany and unease over the economy could create ideal conditions for a Republican to reclaim the governorâ€™s mansion.

Mr. Giuliani has told associates that he will decide on a candidacy within 30 to 60 days, as he weighs whether he can be elected statewide and what impact another campaign would have on his business interests.

He is already laying the groundwork. On Friday he traveled to Long Island to encourage the state Republican Party chairman, Joseph N. Mondello, to step aside, a maneuver that party insiders viewed as the former mayorâ€™s most concrete step yet toward a run.

On Monday, Mr. Mondello announced his resignation, and Mr. Giulianiâ€™s lieutenants were working the phones to drum up support for the replacement they prefer, the Niagara County Republican chairman, Henry F. Wojtaszek, a longtime supporter of Mr. Giulianiâ€™s.

Mr. Giulianiâ€™s efforts to sound out party leaders about a candidacy have also intensified. He has crisscrossed the state meeting with local officials; after a motivational speech to a paying audience in Buffalo last Tuesday, he met with local Republican leaders in a private meeting room to talk about the race. In recent weeks, he has also discussed his possible candidacy with Mayor Michael R. Bloomberg and met in Washington with Representative Peter T. King, a Republican who has considered running himself but said he would not if Mr. Giuliani became a candidate.

I think Rudy is good to go weather incumbent New York Governor David Paterson runs or withdraws. Probably only Obama could persuade the poll challenged Paterson NOT to run.

Rudy will win going away with the current economic condition in New York and will have to be considered again for a national ticket position either as President, Vice President or as Attorney General.

What Flap wants to see is how quickly will GOP celebrities flock to do fundraising for the former New York City Mayor?

Here are the polls:

And, the one in a hypothetical Andrew Cuomo race: