Flap awoke this morning to the Early Today show on NBC. Near the end of the program the young woman anchor launches into a tirade about Sarah Palin not being a good sport or being exempt from late night comedy parody. Then she mentioned the David Letterman Show and mentioned Letterman’s Top Ten Highlights of Sarah Palin’s Trip to New York bit by Letterman on Monday night.

As you recall in his routine, David Letterman denigrates Sarah Palin by listing the following top ten highlights:

10. Visited New York landmarks she normally only sees from Alaska

9. Laughed at all the crazy-looking foreigners enter the U.N..

8. Made moose jerky on Rachael Ray

6. After a wink and a nod, ended up with a kilo of crack

5. Made coats out of New York city rat pelts

4. Sat in for Kelly Ripa. Regis couldn’t tell the difference.

1. Especially enjoyed not appearing on Letterman

Ok, Sarah Palin is a POL and can take the direct criticism and can take it like she did with Tina Fey and Saturday Night Live during the campaign last Fall. But, then Letterman goes after her daughter, Bristol or Willow.

Here is the bit about Letterman saying that Palin’s daughter, 19 year old Bristol, an unwed and single mother was “knocked up” by New York Yankees slugger Alex Rodriguez. But, it was the 14 year old Willow Palin who accompanied her mother to the Yankees game.

Is there ANY wonder why Palin responded that David Letterman was “PATHETIC?”

Letterman’s routines go way out of the mainstream of comedy and are mean-spirited and hateful political diatribes. Do you hear anyone mentioning the fact that Letterman has his own BASTARD child?

NBC News, the Obama Channel, goes out of its way to bag on Palin for saying this in response?

Come on. Letterman was way out of line and Sarah Palin’s response was appropriate.

But, NBC News goes out of its way to portray Palin as a POL who cannot take the heat in the political kitchen. By the way, did I mention that NBC did NOT mention the Letterman parodies of Sarah Palin’s daughters?

NBC News, like David Letterman are both pretty “PATHETIC.”


NBC Nightly News with Brian Williams was the #1 evening newscast again last week with a more than 800,000 viewer lead over #2 World News with Charles Gibson. And with an average of 5.18M Total Viewers, the CBS Evening News with Katie Couric had its lowest viewership yet. In fact, it’s the lowest viewership since at least the 1991/92 season, as far back as Nielsen records track.

Look for ABC and CBS to scramble for some Obama time. 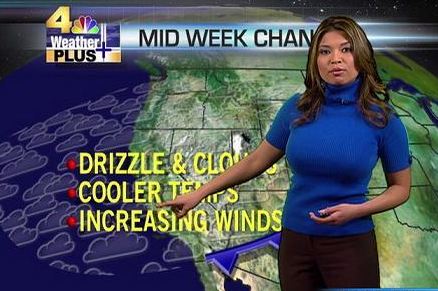 Yeah, Flap is pissed because NBC cancelled one of his favorite shows: Medium.

There is hope that Medium will be picked up by CBS.

But barring that NBC with Leftist Commentators over at MSNBC and Conan O’Brien taking over the Tonight show, the only redeeming reason to watch NBC is Elita.

Ok, I exaggerate.  There is Poker After Dark and Leeann Tweeden.

April 29 marks Barack Obama’s 100th day as President. Will it be a “Hallmark Holiday?”

The â€œ100 daysâ€ concept has had mythical status since the days of the New Deal, when Franklin D. Roosevelt made history with a blizzard of bold federal actions. And reporters have been addicted to stories around this milestone in every administration since.

White House senior adviser David Axelrod calls the 100th day a â€œHallmark holiday,â€ an essentially artificial event with no genuine significance. But he and his colleagues also know the reality: The early-verdict stories are going to be written, creating both a challenge and opportunity for the new president.

So senior White House aides are playing the game with relish, doling out made-to-order anecdotes and what-it-means analytical insights to help reporters write their 100 days pieces. You can already see the results in a spate of stories that â€” thanks to competitive pressures â€” editors are deciding to publish before the actual 100th day.

The permanent Obama campaign is ALREADY spinning “The One’s” accomplishments. Let’s see what is noteworthy to Flap:

NBC News may herald the “100 Days of Obama” as the greatest but so far the man has not delivered much but the same old left-wing weak on defense and tax and spend policies.

Exit Answer: The Greatest President EVER?

NO – Not even close.

No, Chris, there is NO Hardball from Chris Matthews and the LEFT-WING crew over at MSNBC and NBC News. In this morning’s NBC News promos they are already highlighting Obama’s first 100 days in office and it has been what? Two Weeks?

Anytime a journalist says he has a “thrill down his leg” about Obama, Flap becomes a “little” suspicious about media bias.

Chris, Flap is surprised that Jan had an exclusive interview with President Obama. She doesn’t represent an Arab/Islamic based media outlet, does she?

President Barack Obama gave his first formal television interview as president to an Arabic cable TV network, telling Al-Arabiya that when it comes to Middle East matters “all too often the United States starts by dictating.”

Obama taped the interview with the Dubai-based network Monday as his envoy to the Middle East, former Sen. George J. Mitchell, set out for an eight-day trip to the region and elsewhere. The interview complemented the new administration’s first efforts to reach out to Arab leaders in the region, who have been wary at best of U.S. efforts to broker peace between Israel and the Palestinians.

Or is daddy, a media MOGUL with NBC News, maybe MSNBC?